China’s Qingdao Beihai Shipbuilding has completed construction on a new vessel that will operate primarily as an offshore fish farm.

Named Lu Ji Yu Yang 60616 (“Lu Ji Fishing and Aquaculture 60616” ), the self-propelled vessel was designed jointly by the Guangzhou Ship and Ocean Engineering Design and Research Institute and the Institute of Fisheries Machinery and Instruments of the Chinese Academy of Fishery Sciences (CAFS) as a fully-enclosed offshore breeding facility with intelligent management systems. The CAFS will also operate the vessel on behalf of its owner, local conglomerate the Qingdao Guoxin Group.

The newbuild has an LOA of 249 metres, a beam of 45 metres, a displacement of approximately 130,000 tonnes, a deadweight of 100,000 tonnes, and a total capacity for 90,000 cubic metres of water in its 15 breeding tanks. A propulsion arrangement of two 2,700kW dual-fuel engines driving fixed-pitch propellers delivers a speed of 10 knots and a range of 20,000 nautical miles or an endurance of 90 days. The vessel also has five 1,580kW diesel generators and a 200kW emergency generator.

The vessel’s main deck can accommodate a variety of equipment used in fish farming, processing, transfer, storage, and experimental research. There are also a helicopter deck, breeding laboratories, a breeding monitoring room, and a breeding control room. Compared to traditional fixed offshore fish farms, the vessel can ensure a breeding capacity four to six times greater while also reducing the timeline of each breeding cycle by as much as 75 per cent. 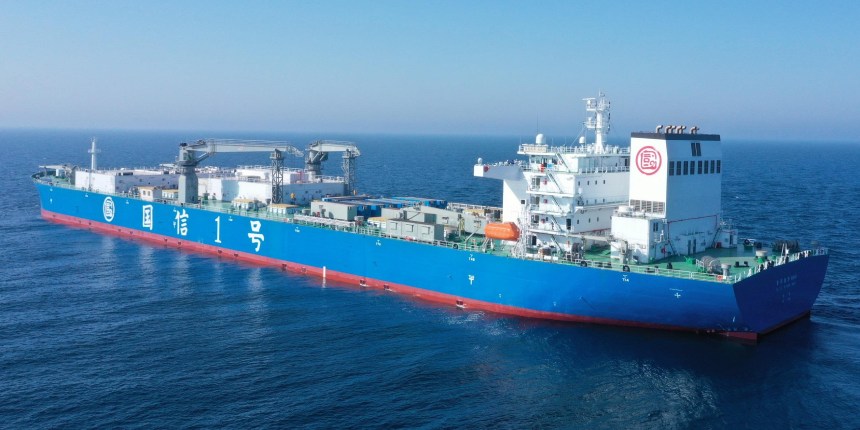 The vessel also boasts a water exchange system. This system adjusts the temperature and the salinity of the water in the onboard breeding tanks to minimise any differences in temperature and salinity between the tank water and seawater outside. Fish that is loaded on board will benefit from significantly reduced exposure to the effects of any drastic change in environment, thus further preserving their health.

Fish are fed using pneumatically-driven, automated systems that unpack and transport feed from a dedicated storage compartment to the various breeding tanks. The breeding tanks are equipped with surveillance cameras and LED lighting with an intelligently controlled dimming function.

The processing facilities will deliver both chilled and frozen fish products for later sale. There is also a recovery system that utilises water flow and gravity to funnel dead fish out of the breeding tanks for proper disposal.

Lu Ji Yu Yang 60616 will be deployed in offshore waters to breed and harvest key fish species such as yellow croaker, grouper, Atlantic salmon, and yellow amberjack. Its initial operational deployment will last three years as part of a pilot project under the direction of the Chinese Ministry of Agriculture and Rural Affairs.

Owner Qingdao Guoxin plans to operate a fleet of 50 vessels with varying dimensions and capacities but all equipped for the same role of offshore fish farming.

Design work on the new vessel was done in compliance to China Classification Society rules. 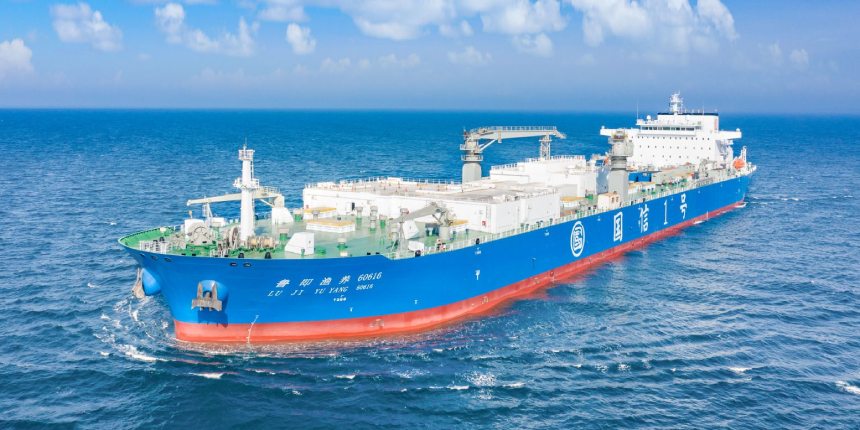