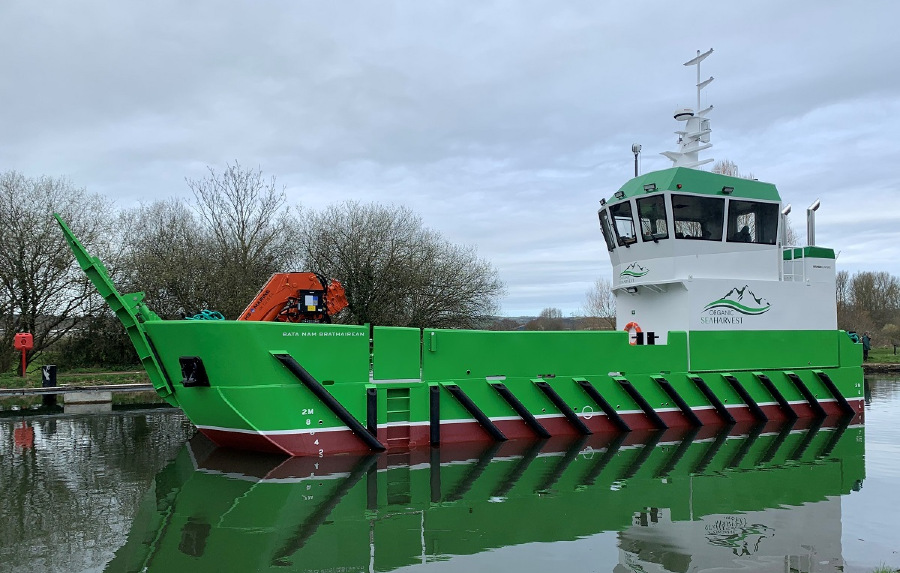 Organic Sea Harvest (OSH), a salmon producer operating on the Isle of Skye off the west coast of Scotland, recently took delivery of a new fish farm support landing craft from Damen Shipyards Group. The vessel has been named Bata nam Brathairean, after the Scottish Gaelic translation of “Boat of the Brothers’ Point”, Brothers’ Point referring to a headland on Skye near the owner’s offshore fish pens.

Designed by OSD-IMT according to MCA CAT2 Workboat rules and built by Damen in partnership with Coastal Workboats Scotland, the newbuild will be used to carry out a wide range of duties including transportation of personnel, equipment, feed, and other dry cargo to offshore fish-farming locations with loading and unloading taking place either by its 3,200- by 3,600-millimetre hydraulically-operated bow ramp or by using its two deck cranes. Once on-site, the vessel can also be used to support activities such as pen maintenance and net cleaning.

The landing craft measures 19.1 by 7.5 metres and has a total of 100 square metres of unobstructed deck space with a carrying capacity of 2.5 tonnes per square metre, allowing a maximum of 50 tonnes of cargo to be carried on each trip. Damen said the craft was designed to function as a “go anywhere” mini Ro-Ro that boasts a draught of only 1.7 metres even when transporting 40 tonnes of cargo. 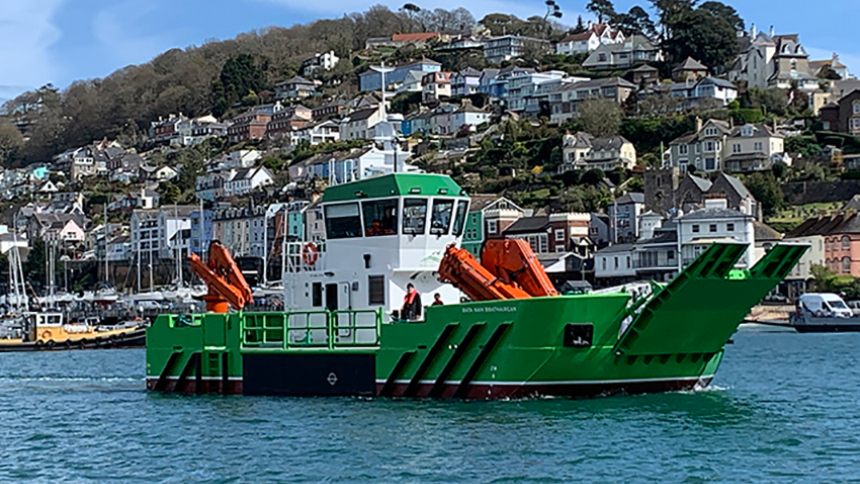 Bata nam Brathairean is powered by two Volvo D13 main diesel engines that produce a total output of 588 kW at 1,800 rpm. The engines are fitted with grid coolers and drive two 1,150-millimetre fixed-pitch propellers via ZF W325 gearboxes to enable the craft to achieve a speed of eight knots and a bollard pull of 5.7 tonnes. Steering is done with the aid of two interconnected rudders.

The vessel is fitted with an HS Marine AK 72/26 E4 fully foldable and telescopic boom type crane on the foredeck, a smaller HS Marine AK 16 beside the wheelhouse on the aft deck, two HHP anchors, two Tenfjord capstans, and . The hydraulics for the bow ramp and the capstans were supplied by Hercules.

A Cummins Onan MDKDL QD 7kVA main generator set provides power for the craft’s electronics, which include two ICOM VHF radios and a Francis searchlight. Meanwhile, the bilge ballast system also includes a connection for a fire plug or for washing the cargo deck in between trips.

The vessel also has ventilated and heated day accommodations for up to eight people. Amenities include a toilet, a drying locker, a pantry/mess, and an off-watch seating area and a navigation console in the wheelhouse.

Damen Sales Manager Mike Besijn said the design of Bata nam Brathairean was chosen partly for its minimal power consumption and emissions. This makes it suitable for supporting activities at four OSH-operated individual fish farms, all off the north-east coast of Skye.