Written by Baird Maritime on October 18, 2017. Posted in Aquaculture World. 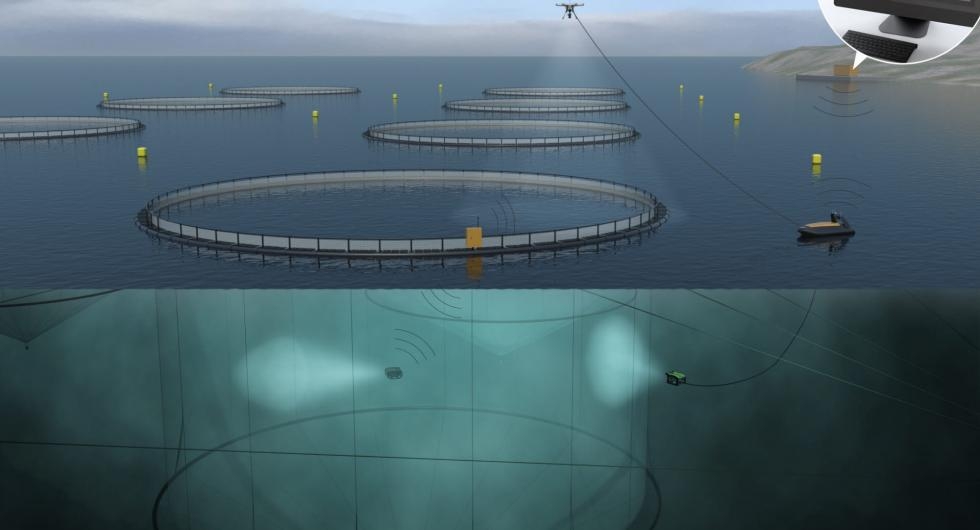 In the future, autonomous and remotely operated systems could play a major role in conducting different tasks at fish farm facilities, given that the industry is planning to locate facilities in more open waters where weather and sea conditions are harsher, which would make certain operations more demanding.

Day-to-day tasks on fish farm facilities, such as fish welfare monitoring, facility inspections, control of feed rationing and lice counting, are currently conducted by several crew on board service vessels.

But researchers from the Norway-based independent research organisation SINTEF, the Norwegian University of Science and Technology (NTNU), along with developers from Maritime Robotics, Argus Remote Systems and Lerow, are working together on a project called ARTIFEX, which seeks to, “enable robotic systems to implement tasks currently carried out by people.”

“There are many advantages to using so-called autonomous and remotely operated systems,” said Per Rundtop, an aquaculture researcher at SINTEF Ocean.

“They require fewer resources, inspections can be carried out around the clock, and the safety of personnel ceases to be a problem.”

The ARTIFEX project, which was launched in 2016 and is expected to be completed next year, will include four aspects— vehicle design, autonomous systems, and airborne and underwater operations—to the research work.

Evjen Hovstein, COO at Maritime Robotics, explains how the systems could work together, saying, “for example, the drone will monitor the fish feeding process, while the ROV carries out underwater inspections and tasks such as repair of damage to the nets to ensure that holes do not become large enough to allow fish to escape.”

​Hovstein says that one person on shore could monitor and operate these operations. He adds that he wouldn’t be surprised if young people found this type of job appealing, saying “it’s almost like playing a computer game, except that here they would be doing something really useful.”

The technology will be tested next year at SINTEF ACE’s full-scale laboratory on the island of Frøya, with the plan to get an autonomous vessel to transport the ROV and UAS out to the facility.

“Once at the facility, the vessel will act as a landing platform and base station for the drone, and a launch pad for the ROV. It will also perform tasks by interacting with the ROV,” Rundtop explains.

Hovstein adds, “it’ll be something like a Kinder egg. Three vehicles in one!”