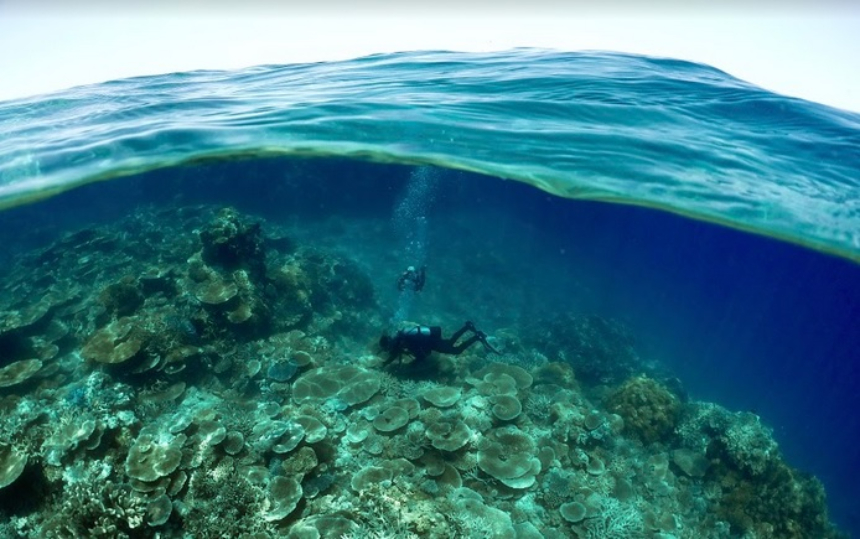 The “Coral IVF” team led by SCU’s Professor Peter Harrison, with researchers Katie Chartrand of James Cook University (JCU) and Associate Professor David Suggett of the University of Technology Sydney (UTS), captured millions of coral sperm and eggs during the spawning event and have successfully reared and “turbo charged” the coral larvae with algae symbionts, ready to replenish heavily-degraded sections of reef.

Professor Harrison said the Larval Restoration Team had been working at Reef Magic’s Marine World pontoon off Cairns since the mass spawning began the night of Sunday, November 17, following the November full moon. There are now millions of healthy coral larvae swimming around in six floating rearer pools ready to be dispersed and grow into new coral communities.

For the first time the team is trialling the newly designed “coral-nursery” rearer pools, turbo-charging the baby coral’s chance of survival through co-culturing with algae, and tracking their progress using new ultra-sensitive optical sensors in real-time.

One of the ground-breaking advances from the team including SCU PhD researcher Nadine Boulotte is co-culturing the coral larvae with their algal partners (microscopic zooxanthellae) to turbo-charge their chance of survival, before being transplanted back onto the Great Barrier Reef.

Professor Harrison, who was first to discover the mass coral spawning phenomenon on the Great Barrier Reef 38 years ago, said the innovative technique is akin to giving the baby corals a “battery pack” by allowing the coral larvae to take up symbiotic algae, giving them the potential to acquire more energy, and therefore grow faster and survive better.

JCU Senior Researcher Officer Katie Chartrand has been carefully growing the algal cultures in the lead up to the project and says the coral larvae are able to acquire symbiotic microalgae much earlier than they would in the wild.
More than 10 billion cells of a more thermally-tolerant species of algae have been grown for the team’s developing larvae to take up rather than the baby coral securing this symbiont well after settling.

UTS Associate Professor David Suggett performed the initial algal culture process, and was able to track the uptake of these algae symbionts by the coral larvae in near real time using new optical sensors.

Professor Suggett said the new sensors are so sensitive that they are able to track uptake and photosynthetic activity as the algae initiate symbiosis with the larvae. These algae give the larvae a metabolic boost that normally they would not receive until metamorphosing on the reef into baby corals.

Professor Harrison has been successfully trialling his unique coral restoration process at ever-increasing scales in the Philippines and on the Great Barrier Reef for the past seven years. He and his team capture spawn from corals that have survived bleaching devastation and keep them in “nursery enclosures” to keep them from floating away before they are capable of settling on the reef.

The team then continues to monitor the reefs during subsequent months to track how well the coral babies survive and grow into new colonies that can become sexually mature and begin reproducing within three years.

Reef tour operators Aroona Boat Charters and Reef Magic are the key industry partners for the research. Funding is provided by the Queensland and Australian Governments Coral Abundance Challenge.