Written by Baird Maritime on September 3, 2018. Posted in Aquaculture World. 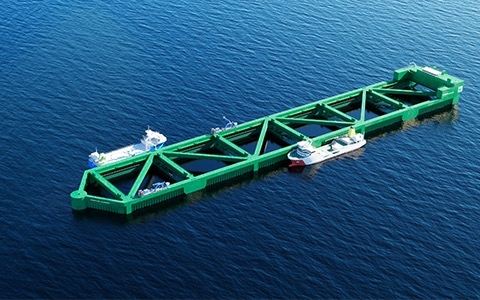 Construction of the aquaculture ship Havfarm, an offshore salmon farm, announced by Norwegian company Nordlaks in February this year, is well underway, with the company also ordering a new hybrid/LNG live fish carrier.

The new environmentally-friendly fish carrier, or wellboat, is designed by NSK Ship Design and will be built at Tersan Shipyard in Turkey. It will be used to transport live salmon from the offshore fish farm to the onshore processing facility.

It will be fitted with four LNG engines as well as propulsion and dynamic positioning system from Rolls-Royce. Capable of carrying over 600 tonnes of live salmon, the wellboat will substantially increase Nordlaks’s transport capacity.

Rolls-Royce will supply six TT1100 tunnel thrusters to the fish farm, which has been designed to produce salmon further offshore than has been possible so far. The thrusters will be used to circulate water both inside and underneath the cages in which the fish stocks are held.