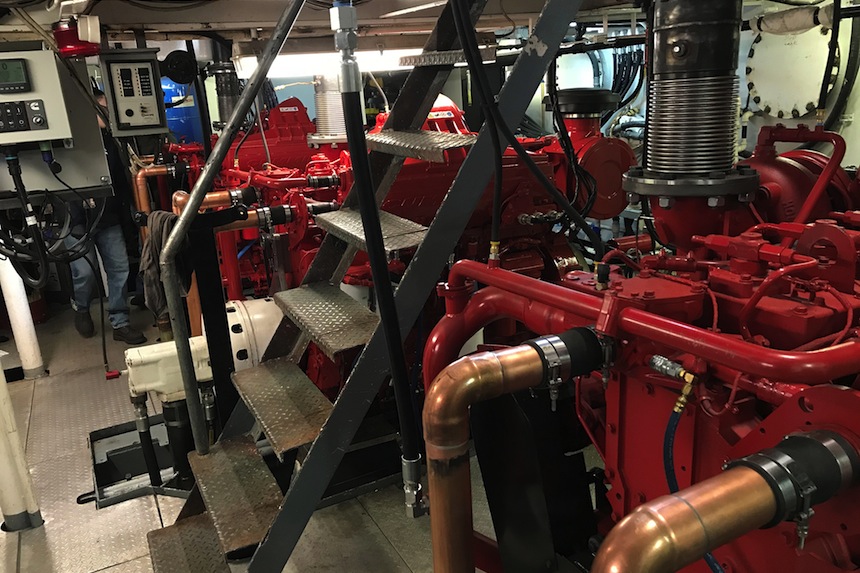 As sometimes happens with boats in the maritime world, the recent repower of a tug shone a light on a pair of well known independent companies. The tug Gretchen H (ex Harry Olsen, Polar Breeze) was built by Rodriguez Shipbuilding of Coden, Alabama in 1997 and is currently owned, since 2005, by Boyer Towing.

The Gretchen H is a good solid boat and her owners decided she was well worth a new set of engines. At 80 by 30 feet she has an eleven-foot depth. As with many tugs out of the Rodriguez yard she has triple propellers and triple engines. S

he had an older set of engines rated at 700 horsepower each. The owners decided on three new Cummins QSK19 Tier 3 compliant engines rated for 750 horsepower each at 1,800 rpm. The existing Twin Disc MG5202DC gears with their 6.1:1 ratios were a good fit for the new engines so they were retained.

Boyer did the repower itself at its own Seattle yard. The old Luggers came out and the new, bright-red Cummins machines went in. The tug performed flawlessly on sea trials and is ready to go back to work towing barges between Seattle, Wake Island, or Alaska.