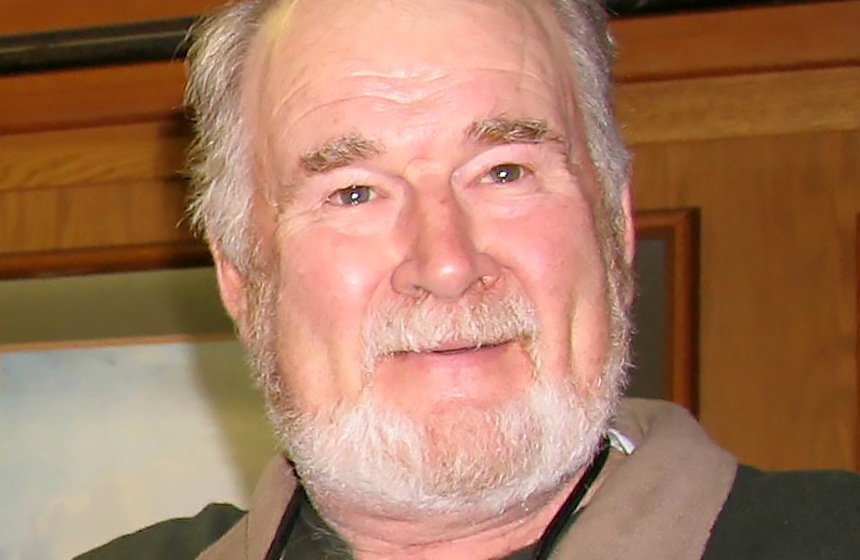 The oldest child of Ed and Myrtle Freeman, “Dugie” was born Arvie Edwin Freeman on May 15, 1941 in Coquille, Oregon, USA. His Freeman family heritage traces to an infant boy who was anonymously abandoned on a doorstep in 1833.

His given name came from his mother’s father, Arvie George Sargeant, who was a timber faller in the Coos, Curry, and Klamath County areas and performed as a laborer on the construction of the Isaac Patterson Bridge prior to completion of the bridge in 1932. His own father, Willie Edwin Freeman, moved west from Nebraska traveling in rail cars as a hobo during the late 1930s.

Dugie’s early years were spent in the Powers area where he attended school through the eighth grade, living a Tom Sawyer/Huck Finn life style and making life-long friendships prior to the family moving to Gold Beach in 1955 when his father had taken the job of head mechanic for Brownie Coldiron’s logging operation. His last year in Powers, Dugie was the point guard on the eight grade basketball team that won the Coos County championship, beating all of the teams from Myrtle Point, Coquille, Bandon, Coos Bay, and North Bend.

With his outgoing personality Dugie was popular and a good athlete due to a combination of enthusiasm, work ethic, motivation to develop skills, willingness to take on just about anything, and his quickness to share a good laugh or two. In Gold Beach he was the football team quarterback, point guard on the basketball team, and second baseman on the baseball team.

From the time he was a young boy, Dugie loved the outdoors and physical activities like hunting, fishing, and sports. This characteristic never left him. Dugie worked hard at a golf game where he peaked at a 5 handicap and golfed with many different friends at some of the nicer courses in the world. He hunted deer, elk, duck, geese, pheasants, and other critters in all parts of Oregon and many other locations across the West. He was an avid trap shooter and one-time Oregon state champion.

Genuinely liking people, Dugie developed great faith in a person’s character and pooled that with a sense of humor that would be on the lookout for irony or ridiculousness or many times just looking for some fun. His first assumption when meeting a new person was to look for strength and accomplishment. He knew that the best way to find out if someone could be trusted was to trust them and go from there. He could see good attributes in most everyone, preferring to downplay a person’s faults and focus on strengths rather than dither about weakness.

When his high school years ended in 1959, Dugie decided college wasn’t for him. His choice was to make a living using his back like a crow bar if it came to it and he was ready to get started. Dugie went to work serving an apprenticeship under his father Ed Freeman in Brownie Coldiron’s operation. Dugie worked twice as hard as people around him, learning the trades and how to work from a master. He felt he had to be willing to do anything and put in more time and pay more attention than everyone else. More importantly, he was going to learn and prove to himself that he was capable.

In 1964 Dugie and Ed rented a building that had formerly been used as the first diesel driven power plant for Gold Beach and started their own company, Freeman Fabrication. They did all things repair, maintenance, and construction for the local logging industry and also built and sold a bulldozer blade end bit that Ed had patented.

Working for all the loggers in the area and filling orders for end bits there would be plenty of work to keep busy. Part of their business plan was that loggers break a lot of equipment and there would be many all-night shifts pulled, laying on their backs in the rain and wind and mud, welding and monkey-wrenching until they could get a piece of equipment going again.

Ed and Dugie worked long hours, day and night, seven days a week, to keep other people’s businesses operational. In the winter they built fires under bulldozer engines to keep them from freezing. In the summer when a key piece of gear broke down a logger’s income stream was stopped so they always dropped everything and got the guy going. They worked through the Christmas Flood of 1964. There was some success for the Freemans, Ed drove a convertible Thunderbird and Dugie drove an XKE Jaguar.

Unfortunately, the nature of the logging business in those days had a lot of loggers working people like the Freemans from breakdown to breakdown. While his work life was coming together, Dugie experienced personal difficulties away from work. In 1964 his first marriage had ended in an acrimonious break up. His former spouse had custody of their two boys and daughter, taking the children to Northern California where later on his daughter Shelly tragically died in an automobile accident. During this time Dugie immersed himself in work.

In 1969, Dugie and Ed along with Jim Howard formed a new company, Freeman-Howard, conceived to build ocean going commercial fishing boats. Moving from one unforgiving industry to another made sense for the Freemans and they were going to get serious about the ocean. They built a new all steel building located a couple of blocks east of the Port of Gold Beach airport. It was surrounded mostly by open ground and field areas and was one of only a few buildings of any type in the general area at the time. A boat at 80 feet in length and 20 feet in width would be snug but fit nicely. The boats would be trailered to launch into the Rogue River.

The first boat was an all steel Edwin Monk designed double chine 58 foot long limit seiner. The build took around a year. The boat would focus on the fertile pink pandalid shrimp grounds off the southern Oregon coast. It was the only all steel hull/steel top-house vessel built by Freeman-Howard and the first of a total of 25 vessels built over a period of the next twelve years. Boats were built for salmon, tuna, halibut, shrimp, sablefish, and crab fisheries from California to Alaska. Dugie, his father, and the crew were building the first all-aluminium, all welded commercial fishing boats up to 80 feet in length to be built in the United States.

In September of 1970 Dugie married Shirley Eisenbach Pierson, who had recently had her own share of adversity. Shirley’s first husband was a commercial fisherman who had disappeared at sea in a freak storm offshore near the Oregon/California line down by Point St. George. With her own three small sons, overnight her world turned upside down as Shirley found herself a widow. Dugie and Shirley were married until his death, a few months short of their 50-year anniversary.

Through these experiences and also in times that were to come, Dugie and Shirley supported each other. Knowing first-hand what it’s like to be forced to take a path not chosen or to face diminishing options with only one’s self to turn to, together they forged an unpretentious and realistic relationship.

They were appreciative of life in general and often focused on small things that a less grateful person wouldn’t notice. To survive they learned that they had to take risks if there was going to be any improvement but they also had to be conservative to protect any progress that had been made. Especially around working people and those who needed a lift, in spite of their own hardships they demonstrated countless times a willingness to give more than normal without expectation of anything in return except common courtesy.

Dugie was especially concerned about opportunities for young people entering the trades, personally financing a number of local young people’s post-high school education. Upon his passing, Dugie dedicated his personal Individual Retirement Account to the Southwest Oregon Children’s Foundation in the form of the Freeman Endowment Fund, with the desire that he could continue giving to Central Curry County young people long after his mortal life.

In 1977 Dugie, Ed, Philip Wright, and Bo Shindler formed Freeman Marine Equipment to build and sell a commercial deck hatch. A foundry was built in Dugie’s garage to start casting the hatch covers. After a couple of years production requirements grew so they purchased commercial property south of Gold Beach in the Hunter Creek area where the Brunswick Corporation had recently vacated a small arrow shaft factory.

Dugie and Bo purchased the interests of the other two partners in the early 1980s and the company expanded to include many different types of marine closures (hatches, doors, windows, and port holes), leveraging the boatbuilding experience to serve ocean going commercial fishing and oil supply vessels, US Navy and US Coast Guard craft, passenger for hire vessels, and recreational boaters including megayachts.

They always paid as well as the company could afford, experimented extensively with profit sharing, and paid full family medical insurance premiums for all employees and their families. Dugie focused on the manufacturing of all the company products and much of his innovation drove both product development and processes.

From the 4,000 square foot Hunter Creek arrow factory building they eventually added buildings and equipment over the next 35 years to put over 100,000 square feet under a single roof. They transformed the company into a world-class organization, earning International Standards Organisation ISO 9001 certification, the only marine closure in the world to attain this distinction. Freeman Marine Equipment’s international efforts were recognised by the federal Small Business Administration as Exporter of the Year, a distinction separately awarded by the State of Oregon. In 2011 they sold Freeman Marine Equipment to Brad Miller and retired.

Dugie wasn’t afraid to be the guy that people took potshots at and knew that making a mistake wasn’t the worst thing in the world if you were trying to do something worthwhile. Like any great leader and team player, Dugie was equally comfortable under a machine covered in grease or sitting at a boardroom table, he always gravitated to the places where he could see a gap needing to be filled.

He was willing to sleep in a corner of a shop or on the seat of a truck, skip a paycheck or two when there wasn’t any money in the bank, take the lumps as they came, and get up the next morning to give it everything again. He loved his morning coffee groups and also liked a drink off the top shelf at the end of a day well spent.

Dugie’s community service included serving on the board of directors for the Central Curry School District, the Curry Health District, Curry Health Foundation, and the Cedar Bend Golf Club. He was a member of the Gold Beach Rotary Club for nearly fifty years and a past president. Dugie was a proud American, held life memberships in the National Rifle Association and the Rocky Mountain Elk Foundation, and was a Rotary Paul Harris Fellow. Anyone who knew Dugie knows his energy and can do attitude will be sorely missed.

Following a brief battle with cancer, Dugie Freeman passed away peacefully in his home on the morning of June 9, 2020 with his wife at his side. He is survived by his wife of 49 years, Shirley Freeman; grandson, Eddie Freeman; granddaughter, Misha Freeman; son, Devery Freeman; brother, Gerald Freeman; stepsons and their spouses and children, Ron, Monte, and Mark Pierson; and an abundance of friends from all walks of life and all parts of the world.

He was preceded in death by his parents, Ed and Myrtle Freeman; daughter, Shelly Freeman; and son, Robin Freeman.