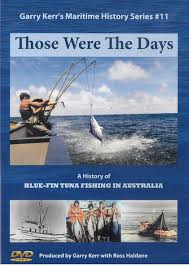 With many of Port Lincoln’s tuna fishermen now rich beyond their wildest dreams, it is hard to imagine the economic roller coaster ride endured by Australia’s southern blue-fin tuna fishery.

It is high time that the sector’s amazing history was recorded. Those of us with a strong interest in it are fortunate that it has been recorded so well in this excellent video. Your reviewer enjoyed watching it immensely. He also learnt a lot and was reminded of much more. This is exactly what modern economic and social history should be all about.

Bass Strait fisherman Garry Kerr’s gathering acclaim as an historian is well-deserved. He performs a very valuable, but still sadly under-recognised, service to the “Cinderella” industry that he loves so much and knows so much about. His very knowledgeable accomplice in this venture is Ross Haldane, a very experienced and unusually well-educated Port Lincoln fisherman whose family were the pioneers of the southern blue-fin tuna industry. He, too, knows what he is talking about.

Comprising mostly vignettes in the form of interviews with and video flashbacks of the people, boats and incidents that made the industry since the mid-1950s, the video is effectively “living history”. It is also an important record of a significant part of Australia’s maritime history. We are fortunate indeed that Kerr and Haldane have gone to the considerable trouble of producing it.