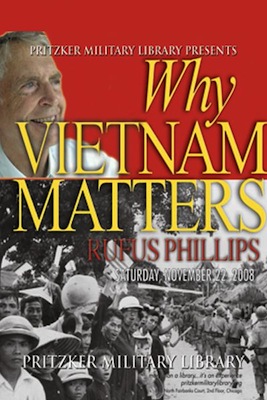 A brilliant book! Written in 1983 and first published in 2008, it was re-released as a paper-back last year. Apparently the author came up against “no-one wants to read more about Vietnam” publisher erected brick walls until he came across the wonderful Naval Institute Press. They have done a first rate job with his book.

Basically, it shows very clearly and concisely why the United States failed so dismally in Korea, Vietnam and, subsequently, in Iraq and Afghanistan and elsewhere. This they managed contrary to their own instincts and political philosophies and traditions and the excellent and prescient advice of their own, valuably experienced, people on the ground in the field.

This reviewer believes that America’s major problem is that far too few of its people study geography or world history at school. Even fewer do so at university. The author very rightly propounds that this makes them generally both arrogant and ignorant in their dealings with foreigners. Washington has become hopelessly hubristic, ossified and bureaucratised as a result.

As well as showing what has gone so terribly wrong in Vietnam, the book has a very strongly positive slant emphasising where America has got things very right as in the Philippines. It also shows very clearly that some excellent people have made very useful contributions before they were ground down by the system.

Americans are a generous, clever and innovative people. It is sad that some ignorant and arrogant politicians, generals and bureaucrats have led them badly astray since the Second World War. Against the background of the Vietnam debacle, the author brilliantly explains why this is so and how that great nation could do much better in future.