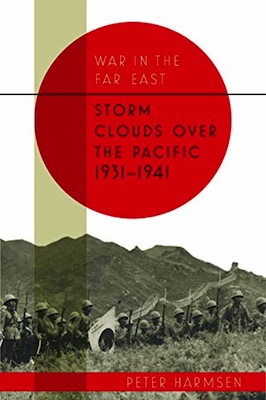 The Pacific part of World War II is generally perceived as a four year conflict. As this first-rate book clearly demonstrates, it was much more than that. The Japanese were preparing for such a war from the early 1900s, at least.

Indeed, as a lieutenant, General Douglas MacArthur toured the Far East, including Japan, as aide to his father, General Arthur MacArthur, in 1903. MacArthur senior very presciently predicted then that the United States and Japan would be at war within a generation or so.

Mr Harmsen very ably and thoroughly describes the final decade of Japan’s preparation for that war. It was quite obvious to all concerned that Japan was set on its course but, for numerous reasons, the rest of the world, including its likely victims, sat on their hands.

All of nastiest traits of Japan’s military Code of Bushido were cruelly displayed in China for most of that decade. Japan’s military despots became increasingly arrogant as they deluded themselves about their military capabilities. The rest of the world acquiesced in that until the Tojo government took their fatal step too far in bombing Pearl Harbour.

The author describes the process very well although his book is too small to cover some of the very interesting but more minor Japanese preparations. For example in Micronesia starting in the early 1920s.

It is to be hoped that this book might provide a wake up call to modern readers about the dangers of military dictators. They cannot be trusted.