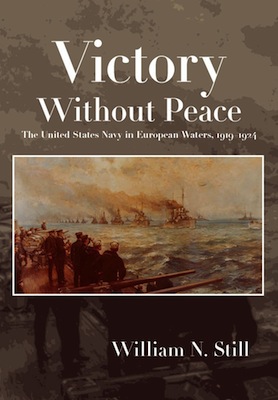 Most American warships and their crews returned home quickly when World War I concluded. However, a significant few remained around the still troubled continent of Europe for a further five years. The Allies may have achieved victory but Europe remained far from peaceful.

This is the third volume of what will hopefully be a quartet of very well written books from the same author describing US Navy activities in Europe from 1865 until 1929, when its station there was abandoned as America sought isolationism.

The period covered in this volume was a particularly active and interesting one that coincided with the rise of the Bolsheviks and the destruction of the remnants of “White” Russia; the final crushing of Germany and the Austro-Hungarian and Ottoman empires; the rise of communism and fascism; the genocide of the Armenians; and, much more besides.

This very detailed book describes the naval activities that arose from America’s responsibility for executing the naval terms of the Armistice. It shows clearly how those activities were constrained by the parsimony of Congress but how they were generally very effectively completed nevertheless.