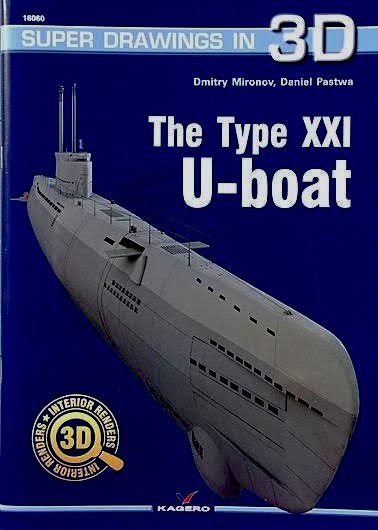 The Polish publishing house Kagero Publishing is responsible for this fine review of the Third Reich’s very important breakthrough submarines, the Type XXI U-Boot. Fortunately for the Allies, they were developed too late and only two of the 131 examples built saw service.

The Type XXI was the world’s first true submarine as distinct from “diving boat” in that it could remain submerged for lengthy periods. Compared with the Type VII and Type IX boats, it was considerably faster (16 knots) submerged thanks to a much more streamlined hull. It was quieter and more comfortable and spacious. It also carried more (23) torpedoes or a combination of torpedoes and mines.

It had larger and more efficient motors and much greater battery capacity. It had a very effective “silent mode” whereby it was practically undetectable at submerged speeds of up to six knots at which it could cover up to 350 nautical miles.

They were some of the first ships of modular construction.

Unfortunately for the U-bootwaffe, they were rushed into service before many of the construction and equipment “bugs” inherent in such a programme could be sorted out. By the time they entered service, competent U-boot crews were scarce and the Allies, generally, had gained enormous advantages on land, sea and air. Their potential was unproven.

This is yet another excellent Kagero Publishing presentation of the realities of twentieth century warship, design, construction, equipment and operation.

(By Dmitry and Daniel Pastwa)