BOOK REVIEW: The Other Norfolk Admirals – Myngs, Narborough and Shovell 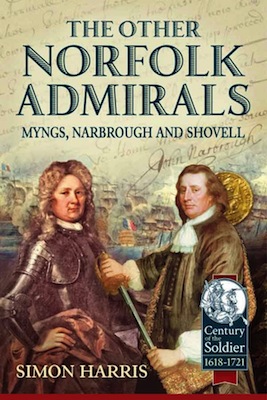 Having some years ago sailed through the Scilly Isles, off the south-west tip of Cornwall, your reviewer is particularly fascinated by the story of Admiral Sir Cloudesley Shovell who lost his fleet and most of his men there in October 1707.

Driven aground on the rocks there by bad weather, Shovell, of course, had no chronometer and, so, only a very rough idea of his longitude. He was neither the first nor the last, simply the most spectacular to meet a similar fate.

There was, though, much more to Sir Cloudesley than his spectacular demise. He was, like his relatives, Myngs and Narborough, a very successful officer, captain and admiral. All three men were significant contributors to the naval successes that were so important in making Britain “Great”.

This delightful book well describes the brilliant careers of the three Norfolk admirals who have been rather overshadowed by the later brilliance of Nelson. It does them full justice and corrects something of an historical oversight.

Fishing boat with four on board goes missing off Massachusetts coast