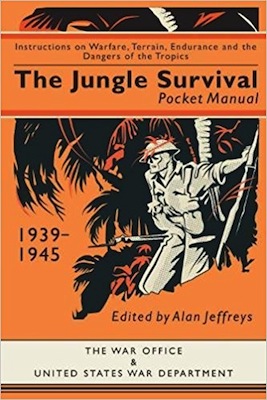 This excellent little guidebook was apparently first published jointly by the British War Office and the United States War Department in August 1942. It was a pity it was a bit late for your reviewer’s father who first went into battle against the Japanese in that month in the jungle of Milne Bay, Papua New Guinea.

It was a pity for their enemy, the Japanese, that they did not apparently have a similar book either. While the Japanese were apparently worse prepared, both sides suffered more from the depredations of the jungle than from the soldierly efforts of their enemies. If the tropical diseases that were rife in all jungle areas failed to kill you they certainly made you remember them for as many as two decades afterwards.

Tropical jungle operations, whether commercial, leisure or for war, are different. You need to be prepared, well prepared, for them. Humans can live and work in such places but they must take all necessary precautions. This book was a very useful guide to those precautions when first published. It is even more so now with its excellent new introduction.