BOOK REVIEW: The Hawkesbury River – A Social and Natural History 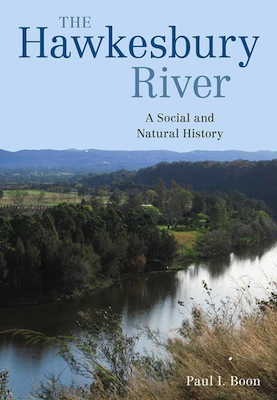 By Paul I Boon

A big, beautiful, expensively produced and very well illustrated book written by someone with a great passion for its subject area. Your reviewer shares that passion and has done for more than sixty years.

The Hawkesbury and its associated tributaries, creeks and bays is a very special and beautiful place. Much of it, thanks to the judicious reservation of natural parks and the steepness of its surrounding terrain, remains a remarkably unspoilt wilderness. It is especially remarkable given that it is located only about 35 kilometres from the CBD of the huge city of Sydney.

It retains a very special place in the history of the original aboriginal inhabitants of the area as well as with the earliest European settlers of the original Australian colony of New South Wales. Its weathered sandstone rocks make the area particularly attractive as do its original flora and fauna. The sandstone provides building material that is both abundant and beautiful.

While mostly unspoilt, the region houses a variety of industries including farming, fishing, aquaculture, winegrowing and tourism. It is a boating paradise and is bordered by some of the best surf beaches anywhere.

Professor Boon is not only passionate about his subject but is very knowledgeable too. He seems to have spent a great deal of his life exploring and studying the area. This is reflected in the detail he records.

Your reviewer’s only worry, as a resident of the area, is that the author makes it so attractive that we are likely to be deluged with visitors.