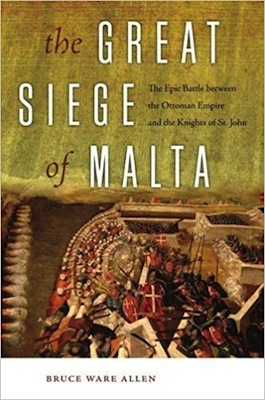 Your reviewer visited Malta last year and explored it thoroughly, spending many hours in its excellent museums and wonderful historic buildings and fortifications. It is a fascinating place with an amazing history. For anyone who is interested in maritime history it is worth at least a week.

Malta, of course, has experienced and withstood at least two great sieges. Those of the Ottoman Turks in 1565 and of the Italian/German Axis powers in 1940 to 1942. Both were very determined and powerful invading forces but they both departed eventually with their tails between their legs.

As with its twentieth century counterpart, the sixteenth century siege saw Malta at the centre of a semi-global conflict. It was the key to the Mediterranean. It was the focus of a massive Muslim-Christian conflict that took in much of that sea.

Although outnumbered many times over by the Muslim invaders, the Knights of St John were very professional soldiers who were brilliantly led by their Grand Master Jean de Vallette. After a long hot summer of bitter fighting, the Knights prevailed, overwhelmingly. The Capital of Malta was named Valletta.

A wonderful story, stirringly told. It is to be hoped that the author will produce a similarly stirring sequel about Malta’s World War II experience.