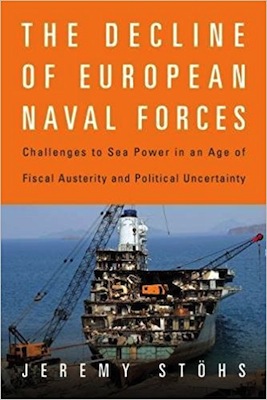 Reading this book gives you some sympathy for Donald Trump and his oft voiced complaint that America’s NATO partners are not pulling their weight with respect to their own defence efforts. Indeed, they have mostly not been doing so since the end of World War II.

The author presents a detailed, nation-by-nation review of the current state of the major European naval forces. It is not an encouraging picture. There is no doubt that, in varying degrees, all the European nations have been “free-loading” on the United States and still are. Britain, France, Germany, the Netherlands and the Scandinavian countries are all rich while Spain and Italy, although economically chaotic, are certainly not poor. All could, and should, afford to do much more.

Given the recent bad behaviour of Russia and its historic propensity for military mischief, he is absolutely correct. He is also correct in his suggestions that, in correcting that imbalance, European navies do not necessarily need to invest in complex and expensive vessels. They just need more and more appropriate ones. They should also co-operate more effectively in their ship purchasing.

A thought-provoking and sensible analysis.