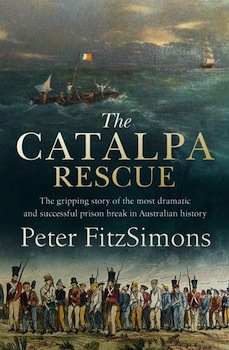 Peter FitzSimons is an Australian “celebrity” journalist and TV personality who affects a red bandana. He was also, apparently, once a champion rugby player. He has, by producing histories on a production line basis, become a prolific creator of “novelised” Australian history.

This reviewer is still uncertain as to the real educational value of novelised history. However, if such books, by entertaining them, encourage the man or woman in the street to read and take an interest in history, they must have some worth.

As with Mr FitzSimon’s other books, this one takes a real incident from Australian history and embellishes and glamourises it. This novelisation process, presumably, makes the book more interesting and readable even if the original, true story is perfectly interesting and exciting in itself.

This one tells the tale of a well-organised escape of several Fenian (Irish rebel) prisoners from Fremantle Prison in Western Australia. The maritime angle came from the fact that the escape plan was based on the prisoners escaping to and aboard an American whaler and sailing to, eventually, Boston.

A good yarn. But, is it history?