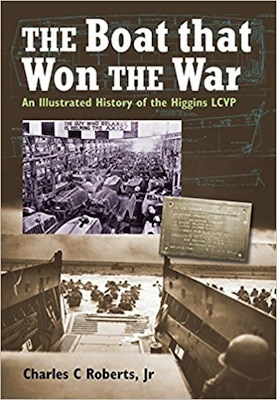 More than 23,000 Landing Craft Vehicle Personnel (LCVP) or “Higgins Boats” were built during World War II. General Dwight Eisenhower, who presided over history’s greatest ever amphibious invasion, called them “the boat that won the war”. The author of this fine book is clearly besotted with them. He even owns a fully restored example that he keeps in his own private museum.

The author is clearly something of a small boat fanatic. He has a masters degree in engineering and a PhD, presumably in history. Even during his military service as an army officer, he managed to involve himself in research on amphibious vehicles. This passion is the background to a fascinating and important book.

His brilliantly researched and illustrated history of the concept, design, construction, distribution and operations of the various iterations of “Higgins Boats” provides an invaluable record for military historians and the designers, builders and operators of their successor boats. The photographs and drawings of every imaginable aspect of the LVCPs are beyond price.

A magnificent contribution to both naval history and the future planning of amphibious operations.