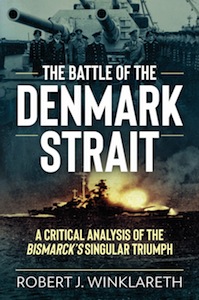 The Denmark Strait separates Greenland and Iceland. It is where the German battleship Bismarck sank the British battle cruiser Hood in May 1941. The subsequent pursuit and destruction of the Bismarck by British forces has become one of the most celebrated naval battles in history.

This book is a most unusual technical and statistical analysis of the battle, its preparations and aftermath. It clearly demonstrates why, at this stage of World War II, battleships had reached their use by date. Even the most powerful was incredibly vulnerable to aircraft attack.

If you can cope with rather excessive detail as to “fall of shot” and whether the fatal torpedo hit on the Bismarck came from port or starboard, you will find this book fascinating. The author is a mechanical engineer and professional technical analyst who spent his career analysing problems with weapons systems. It shows.

An incredibly detailed analysis of what happened to the Bismarck, Hood and many other large capital ships as a result of the technical developments of World War II. A most interesting read that makes you think about the current generation of capital ships, America’s nuclear aircraft carriers.