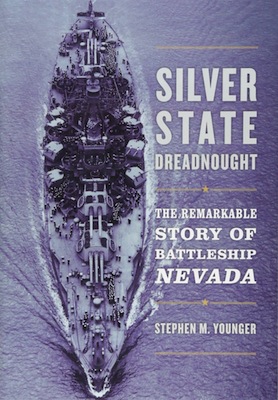 Laid down in 1912, USS Nevada was the world’s first “superdreadnought”; America’s first oil-fuelled warship; the first to have a triple-gun main turret; and, the first to be fitted with “all or nothing” armour. She was a mighty ship that fought in both the First and Second World Wars and served until she was destroyed as a gunnery target in 1948.

Surviving North Atlantic convoy duty in World War I, Nevada was the only battleship to get underway during the Japanese attack on Pearl Harbor, where she subsequently sank in shallow water. Raised and repaired, she returned to North Atlantic convoy duty before participating in the Normandy and Riviera landings in 1944. Moving back to the Pacific, she bombarded Iwo Jima and Okinawa before surviving two atomic bomb tests. Quite a record.

Fortunately, an excellent photographic record of Nevada’s travels, travails and adventures remains. The author has skilfully used them as the basis for a thoroughly good history of a very important ship.