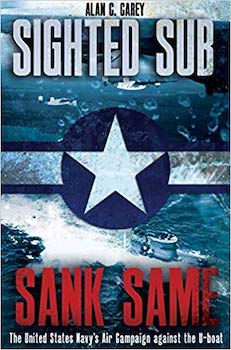 It is no wonder that modern navies have trouble recruiting submarine crews. If any potential recruit submariner were to read this account of relentless hunting of Nazi submarines, he would quickly and decisively volunteer for practically any other posting.

The fact is that life was nasty, brutish and short for most of Nazi Germany’s U-Boat heroes. Three quarters of them, some 30,000, were killed and 783 U- Boats destroyed between 1939 and 1945. The odds of survival for U-Boat crews were slim.

Of the 783 U-Boats destroyed, 159 were sunk by American aircraft and, of those, 83 were destroyed by land and carrier based aircraft of the US Navy. This is the story of those 83 “kills”. It makes for grim reading.

While the U-Boats that made it to sea caused enormous damage to allied war and merchant ships, they were, within three years, themselves completely doomed. The indefatigable hunt for them by Allied naval and air forces was remorseless.

This very well-illustrated but sadly appallingly edited – in terms of spelling and factual errors – book gives the reader a real feeling of that relentless hunt.