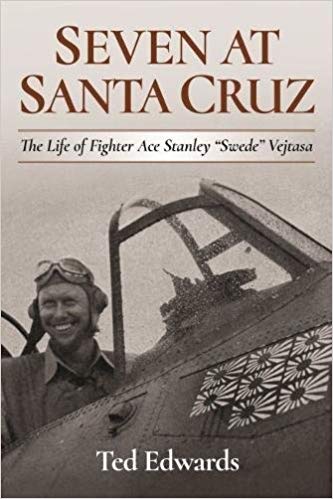 This book’s odd title arose from the fact that its subject, US Navy fighter pilot Stanley Vejtasa, among his other exploits, shot down seven Japanese aircraft in one day during the battle of Santa Cruz in the Solomon Islands.

Despite his three Navy Crosses and numerous other medals gained from that and other actions, Vejtasa is something of an unsung hero as far as the US Navy is concerned. He was outspoken and politically incorrect and did not attend the Annapolis Naval Academy.

That probably explains why, despite his unique talents as a naval aviator, he never progressed beyond the rank of captain. He did, though, command the aircraft carrier USS Constellation, then the navy’s most modern and powerful ship. Yet another example that proves the rule that from “one star” rank and beyond an officer has to be just as much politician as warrior.

Nevertheless, Vejtasa was the right man in the right place at the right time. He grasped his opportunities and utilised his particular talents to achieve great things piloting both bombers and fighters. That story is very well told here.