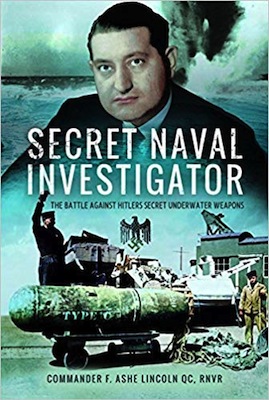 Probably one of the last of the personal World War II histories and undoubtedly one of the most interesting and exciting.

Ashe Lincoln was a very clever and very brave man. As a young lawyer, he joined the Royal Naval Volunteer reserve in 1937 and spent the following eight years closely involved with underwater weaponry. His legal training and experience served him well in terms of both his deductive reasoning and forensic skills. They were particularly valuable in his unusual field of operations. They also probably contributed to his first rate writing talent.

The book was first published fifteen years after the war, mainly because of secrecy provisions, but partly as a tribute to several of Lincoln’s colleagues who he felt had been accorded insufficient credit for their wartime attainments. This fine new edition maintains that tradition.

It provides an invaluable record of Allied and Axis underwater weaponry developments interwoven with an exciting personal tale.