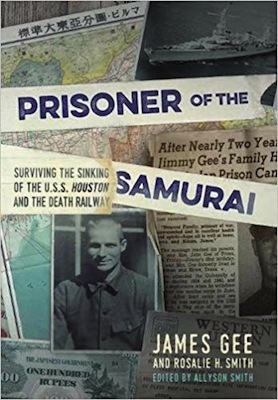 A fascinating tale of courage, endurance and forgiveness told as part of his psychological recovery process after the end of World War II by a young man who had deferred his university studies at nineteen to join the US Marine Corps. His recollections were recorded by a nurse whose daughter found and edited her manuscript many years later. Fortunately, she managed to have it published by the always innovative and adventurous Casemate Publishers.

Early in the American part of the war, Gee was serving aboard the heavy cruiser USS Houston when it was sunk in the Battle of the Java Sea along with a number of other allied ships. That dramatic battle is well described as is his survival followed by nearly four years of incarceration in Japanese prisoner of war camps in Java, Singapore, Burma and Japan.

Despite the unremitting brutality and privation, his story is far from overwhelmingly depressing. Local people were kind, brave and helpful as, even, were some Japanese guards. Gee and a handful of his Marine “buddies” looked after each other throughout their ideal. That and the attention of a brave and innovative Dutch doctor ensured his survival.

His lack of bitterness is impressive. He got over it and that probably helped considerably in ensuring he enjoyed a long, happy and successful life as a lawyer. The Smiths, mother and daughter, have told his tale well.