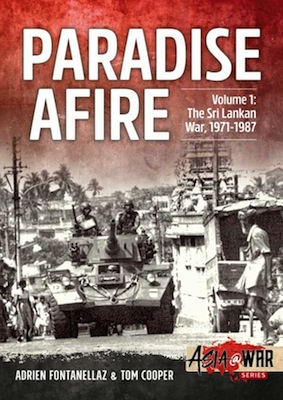 By Adrien Fontanellaz and Tom Cooper

One of the nastiest “small” wars of the twentieth century, the Sri Lankan Civil War was, as is commonly the case, one based on ethnic and religious differences overlain by historical and current commercial causes.

It led, as usual, to massive economic and social disruption, legal and illegal emigration as well as large numbers of fatalities. It was fought without mercy from either side. As is also so often the case, the “rebel” Tamil side was led by young zealots with little sense of responsibility. They were backed by a malign outside force, in this case the Indira Ghandi family’s India.

A tragic and horrible brew that is well, if briefly described here. A good summary of the overall war is presented but, unfortunately, it is rather light on as far as the maritime aspects of the war are concerned. They were particularly interesting as numerous economical technical innovations were developed. Perhaps they could be more fully described in a subsequent volume.