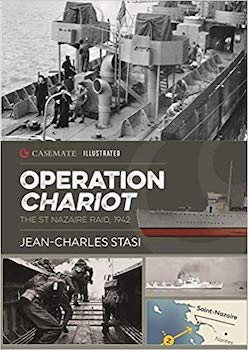 One of the Casemate Illustrated series, this is excellent, easy to read history. Replete with first-rate illustrations, this book makes history come alive.

As is well-known, the Allied raid on the Nazi held ship yard at Saint Nazaire at the mouth of the famous Loire River in France, was a costly but very effective operation. In March 1942 it put the huge dry dock there out of action for the remainder of the Second World War.

Supported by a fleet of motor launches and motor torpedo boats carrying an intrepid band of commandos, an explosive filled obsolete destroyer crossed the English Channel to Brittany where it was driven in to the Saint Nazaire dry dock gates.

There were countless acts of great heroism involved in positioning the destroyer, HMS Campbeltown where intended but the job was done. Eventually, the mass of explosives in the ship were detonated and the ship and dock gates destroyed. So also were some hundreds of Nazi soldiers who were examining the ship as it exploded.

Only a few of the commandos and sailors who were not killed or captured returned safely to England but the raid was regarded as a great success. It eliminated the only safe haven for German capital ships on the French coast.