BOOK REVIEW | My Hitch in Hell 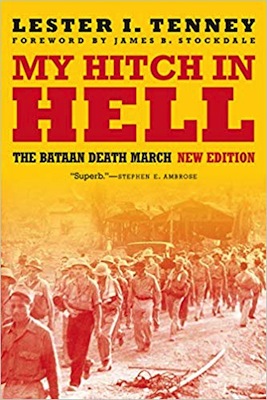 By Lester I. Tenney

This is one, very erudite, man’s graphic story of the Bataan Death March and its aftermath. It is a very sensitive and carefully considered account of a horrible wartime experience and the shattering disappointment of much of his subsequent treatment by the US Government.

The author survived the infamous Bataan Death March in the Philippines following the defeat of American forces there in 1942. He was one of the too few survivors of the march and then survived a further three and a half years as a Japanese prisoner/slave. Obviously a tough man, he lived for 97 years.

The story of the Bataan Death March is now well known. It was not known during the war and for a long time afterwards. Wartime propaganda, self-serving politicians, lily-livered senior military officers and bullying bureaucrats all conspired to ensure that it took decades for the truth to come out.

This book, in its original edition, started that flow of vital information. The epilogue in this revised edition, twenty-three years later, tells us much more. It is fascinating.