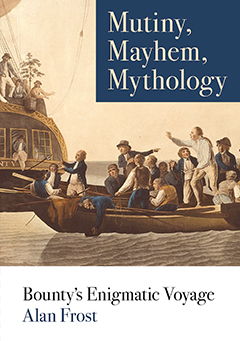 Alan Frost is, without doubt, one of Australia’s best two current historians. The other is Geoffrey Blainey. He is fair, objective, apolitical, perceptive, diligent and a very imaginative and thorough researcher. He specialises in British eighteenth century Pacific exploration, discovery and colonisation. He also writes very stylishly. It is thus a blessed relief to read a true, well-written history after a couple of second rate “novelised” ones.

The outline of the mutiny on His Majesty’s Ship Bounty is generally well known. It is who was to blame that is the controversial factor. After all, there have been innumerable books written and movies made about the subject. Most have sympathised quite strongly with the leader of the mutineers, Fletcher Christian, against the Captain of the Bounty William Bligh.

Frost is much more even-handed. Using a psychological and literary approach, he analyses the many available documents and some more he has discovered, to put the mutiny into realistic perspective. Generally, he lays more or less equal blame on both of them.

Both key characters were prickly and difficult. They were uncompromising and Bligh, at least, was something of a paranoid perfectionist. Christian regarded himself as socially and professionally superior to Bligh. Cooped up in a small ship engaged on a lengthy voyage, these turned out to be very volatile ingredients.

Your reviewer has read many books on the Bounty and seen the movies. Frost’s book is the most objective and informative of all.