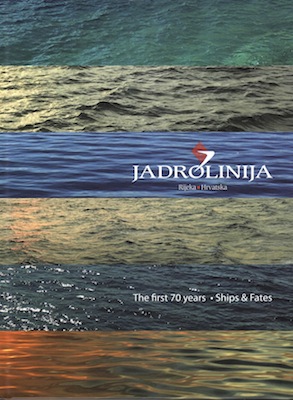 All delegates at the recent Interferry 2017 conference in Split, Croatia, were presented with a copy of this very impressive book as a gift from Jadrolinija, the conference hosts. They were very fortunate.

Jadrolinija, of course, is the state owned ferry company that services the many and beautiful islands along the equally beautiful Croatian coast. It also serves some foreign ports, mainly in Italy. It commenced operations in 1947 when Croatia was part of then war ravaged Yugoslavia. Its then fleet comprised numerous ships that operated under other owners in the area prior to the war.

Since its modern incarnation in 1947 and, more particularly, since Croatia gained its independence in the nineties, Jadrolinija has flourished. It is now a very substantial enterprise.

This book, then, tells (in official World Ship Society format) the story of its many ships, past and present. Some are still operating after 60 years and many are fifty years old. Most are more modern. They are an eclectic mix of Ro-Pax and passenger only and of fast catamarans and conventional monohulls. All are well photographed against the background of one of the loveliest coastal archipelagos anywhere. Each vessel is also given a brief but adequate technical description.

A valuable history and a very useful overview of one of the world’s most significant ferry fleets.