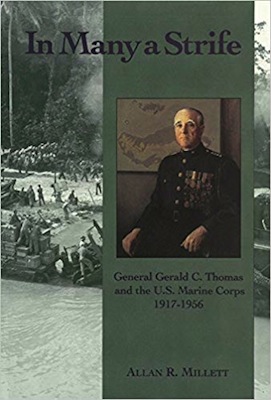 A most interesting and unusual military biography. First published in 1993, the Naval Institute Press has wisely chosen to re-publish it in economical paperback format twenty-five years later.

It is good to read a detailed biography of someone whose career was notably successful despite not quite reaching the top. Thomas achieved a great deal and contributed enormously to the independent survival of the US Marine Corps and to its technical and organisational development, particularly with respect to amphibious warfare.

As well as being a brave, resourceful, clever and inspiring combat leader in three major wars, he was probably the ultimate bureaucratic and political “infighter”. The wars he fought in Washington were every bit as vicious as those he experienced against the Imperial Germans, the Imperial Japanese and the North Koreans and Chinese. He was equally as successful in those as in the “shooting” wars.

The Naval Institute Press is to be congratulated for re-issuing such a fine, interesting and educational book.