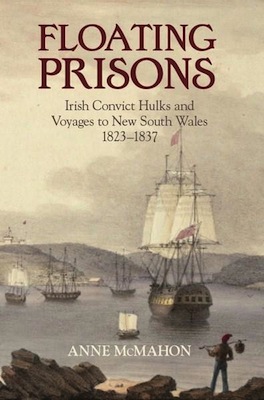 The Irish and their descendants have for almost two hundred years made up a significant part of Australia’s population. For a long time, at least until World War II, they were often a turbulent and troublesome part. This carefully researched book examines the first fifteen years of that lengthy, large and still continuing migration.

Its rule over Ireland in the eighteenth and nineteenth centuries was one of the more notable failures of the British Empire. It was a malign and negligent rule that led to economic and crop failure and, ultimately poverty and outright starvation. This made Ireland a political hot bed. The British response to Irish rebelliousness, in lieu of execution, was imprisonment in the “hulks” or floating prisons and eventually to transportation. By the 1820s New South Wales had become the primary destination for that.

Remarkably, as the author so clearly explains, rather than leading to hell, transportation was for most Irish convicts a relief and an opportunity. They lived better than at home and, the vast majority who behaved themselves, used the opportunity of a new life to better themselves. Theirs was a fascinating period of Irish, English and Australian history that turned out much better than most of the participants expected.