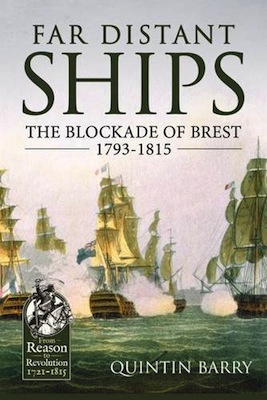 The author, a solicitor and acclaimed military and naval historian has woven a wonderful tale of the Brest Blockade that so effectively frustrated French attempts to invade and conquer Britain at the end of the eighteenth and beginning of the nineteenth centuries.

Fortunately, considerable sections of the personal and official correspondence concerning the blockade have been very well archived. This has provided the author with a practically endless source of information on which to base this interesting and important book.

It was a long and grinding blockade during which the weather, despite numerous attempts by the French to break out, was generally the most effective enemy of the blockaders. As renowned American naval historian and philosopher Alfred Mahan put it, “Those far distant, storm beaten ships, upon which the Grand Army never looked, stood between it and the domination of the world.”

The success of the Brest Blockade inspired that of the American War of 1812. They proved that blockades, properly implemented, can be a very effective strategy. Modern strategists would do well to remember that containment can be very economical in both lives and treasure.