BOOK REVIEW: D-Day – What we haven’t told you… – The Secrets of D-Day 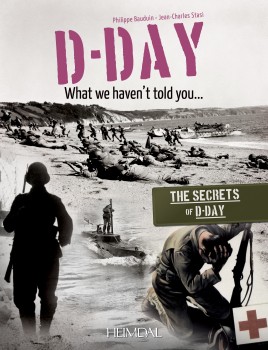 By Philippe Bauduin and Jean-Charles Stasi

This most unusual and quirky book is a joint effort by one of France’s leading scientists and a very experienced and productive journalist and author. They have gone to enormous trouble to dig up a treasure trove of original, informative and downright strange anecdotes about D – Day and the Battle of Normandy. The result is a uniquely fascinating book.

There are details of Spitfire fighters being used as freight planes to carry mail and, even, beer to the troops in Normandy. There were early jet aircraft used by the Nazis. A large German artillery bunker manned by 53 soldiers was captured by a young English officer without a shot being fired. There are details of the adventures of Royal Navy diving officer, “Buster” Crabb, along the Normandy coast.

Within the wider Normandy invasion there were interesting sub-plots such as religious disagreements between Catholics and Protestants and ego spats between General De Gaulle and the Americans. There are many more described. The authors have good eyes for the unusual and, so, have provided us with a most enjoyable book.