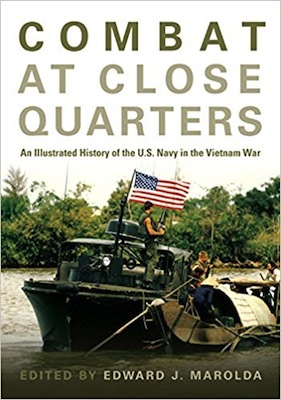 An excellent and very valuable compilation of four lengthy and well-illustrated monographs or essays describing the role of the US Navy in the Vietnam War. Covering coastal and riverine activities as well as airborne and intelligence contributions, they are all set against the very important prevailing political background.

The book closely examines many of the leading personalities. It looks at the delusional behaviour of too many of the leading politicians and bureaucrats and some of the generals and admirals. However, that is balanced by descriptions of the exploits of many of the brave and resourceful warriors who contributed so effectively.

Despite its too numerous misspellings and absence of a glossary and dramatis personae, the book compensates somewhat with its useful maps and excellent photographs and paintings.

America’s Vietnam involvement, along with that of its allies, who are scarcely mentioned, was at the same time sad, wasteful and proud. This book captures that ethos well. While it is probably too late to make any useful difference to America’s equally delusional policies with respect to Iraq, Afghanistan, Yemen, Syria and elsewhere. It is to be hoped that books such as this might be studied and their lessons applied by the nation’s future political, bureaucratic and military leaders.