Written by Neil Baird on May 24, 2019. Posted in Ausmarine - Maritime Security, Book Reviews. 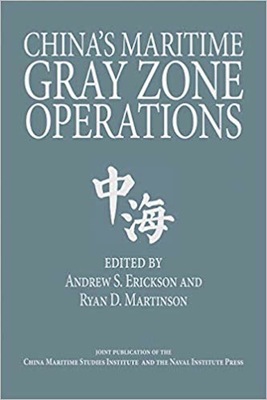 It is very unfortunate that this important book is very unlikely to be read by President Donald Trump, his Cabinet and their leading underlings. If it were, there would be far less childish sabre-rattling and time and economy wasting school yard-like pushing and shoving.

In other words, reading this book might encourage President Trump and his colleagues to grow up and treat China rather more sensibly and realistically.

If ever there was a realistic assessment of China’s maritime capabilities, this is it. Apart from the President, his Cabinet and senior State Department personnel, it should be on the compulsory reading list of every naval officer of captain rank and above.

Apart from realistically assessing and defining the strength and capability of China’s PLA Navy and its associated Coast Guard, its Maritime Militia, Marine Police and other maritime constabulary forces, it details its important relationship with the world’s largest fishing fleet. When you put all that together, China becomes an enormously powerful, innovative and flexible maritime power.

The United States and its allies ignore that important fact at their peril. They also continue to ignore the vitally important initiatives by which the Chinese are changing the face of sea power. They have, among other things, extended guerrilla warfare to sea. There is much to be learnt from the Chinese approach to sea power. This very important book clearly and concisely enlightens its readers to that reality.