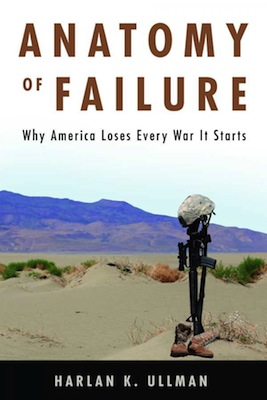 His book should be read together with the recently released The Road Not Taken by Max Boot and Why Vietnam Matters by Rufus Phillips, reviewed here last month. All share the same theme, an examination of why, despite its overwhelming economic and military might, the United States continues to fail so predictably and embarrassingly in all its modern military interventions.

The list, or litany, of failure is long: Korea, Cuba, Vietnam, Panama, Grenada, Haiti, Lebanon, Libya, Somalia, Afghanistan, Iran, Iraq and Syria and Yemen, to name most of them. Over the same period, only the interventions in Egypt, Yugoslavia and the first Gulf War could be described as successful.

As the author succinctly explains, it has not been the fault of the “grunts” on the ground. Rather, the problem has generally been one of political and military leadership complicated by interfering bureaucratic ineptitude. Mostly, the worst decisions were made at presidential and cabinet level but, as Boot and Phillips also explain, some idiotic things were done further down the chain at ambassadorial level and below.

Ullman exposes the arrogance and ignorance (Agnorance, perhaps?) and hubris of too many of America’s political, military, bureaucratic and diplomatic leaders. Far too many of them have been found wanting. They have clearly been the main cause of its military problems. They have certainly never been caused by any absence of finance or fire power.

Much sounder strategic thinking is required. Perhaps a good starting point would be in improving America’s education system to eliminate its sad and dangerous national ignorance of history, geography and foreign cultures.