BOOK REVIEW | American Sea Power in the Old World – The United States Navy in European and Near Eastern Waters, 1865–1917 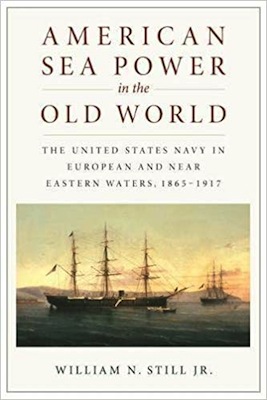 From the end of the Civil War until its belated entry into World War I, the United States Navy was generally regarded as being in something of a “back water”. For most of that half-century much of the foreign activity of the US Navy was restricted to showing the flag and refugee succour.

However, as this brilliantly researched account clearly shows, the period was one of unprecedented change. From the world’s largest navy to insignificance and back again was just one part of it. The industrial revolution and the fast growing wealth of the United States afforded it enormous power and gathering influence. In ships, sail gave way completely to steam as did wood to steel.

Geopolitically, it was also a period of turmoil, particularly in the eastern Mediterranean. As today, there were refugee “crises” involving Syria and other parts of the Ottoman Empire. America, of necessity, became involved. Distance ensured that such involvement revolved mainly around the navy. With many similarities with today, it was an especially fascinating period.

The author’s decision to write on this subject in the late 1970s when America was still obsessed with its Vietnam catastrophe, was prescient. It is even more so when the “rhyming” if not “repeating” of history since is considered. The Naval Institute Press’s timing is also excellent in re-publishing this important book in paperback format.