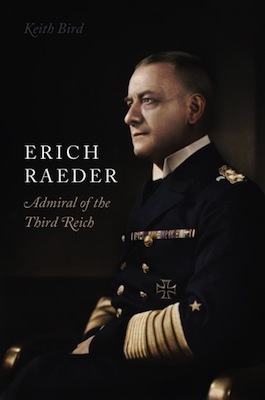 Another re-publication, twelve years on, of a controversial and important biography. This is no hagiography. Unlike in a number of his previous biographies, the subject is certainly not portrayed as an “anti-Nazi”. History has not been re-invented here.

Probably more amoral than immoral, Raeder is shown here as being a very willing tool of Hitler and the Nazi party for the decade following their rise to power in 1933. There is little evidence of his opposing their doctrine or philosophy. Rather, he comes across as being a dedicated servant of the “constitutional” government of the “Fatherland”, no matter how mad or bad that government turned out to be. His previously acclaimed falling out with Hitler was not a moral or philosophical one.

The author refutes the image developed after the war by Raeder and his supporters of his being something of an innocent who was “just doing his job”. Another version of the Nuremberg Excuse. Abundant evidence is presented in this book to prove that was definitely not the case.

Nevertheless, Raeder’s career was long, sometimes successful and interesting. He had enormous influence on the re-building of Hitler’s navy but much less, unfortunately for him, on its operations. This detailed biography describes his life and its consequences very well.