BOOK REVIEW | A Voyage to New Holland and Round the World 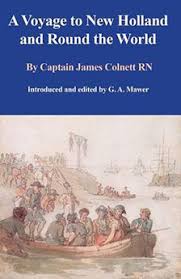 This is a wonderful and enjoyable little book. It comprises a very well up-dated and annotated journal of a voyage from England to Port Jackson (Sydney) in 1803, fifteen years after the establishment of the colony there.

Captain Colnett had wide experience of the Pacific and elsewhere. He had sailed with Cook as a young man and later explored other parts of that ocean including thorough surveys of the Pacific north-west and Galapagos Islands. He was a precise and very literate observer.

His journal is particularly valuable for his early observations and opinions of Sydney even if his political comments were not very prescient. Nor were his predictions that New Zealand would become a more valuable colony.

Despite its faults, it is a very well and tightly edited record of considerable present value.