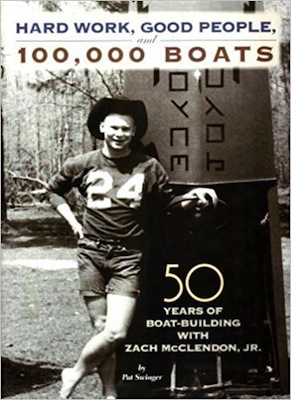 Your reviewer is a sucker for maritime company histories. He has read and reviewed many but this is one of the best. Perhaps that is because it reinforces many of his prejudices but it does more than that. It is a really good tale of building a first rate business despite all the usual obstacles.

The book faithfully records the tumultuous half century history of the MonArk/SeaArk boat building business of land-locked Arkansas and the McClendon family that built it. While many of the 100,000 boats mentioned in the title were small, there were still significant numbers of much larger vessels of up to round 25 metres LOA.

Commencing in the leisure “huntin’, shootin’ and fishin’” market, the company quickly expanded into the wider cruising and houseboat sectors. It also built crewboats for the offshore oil industry and many other work and security boats for customers all over the United States and throughout the wider world. That led, as the company moved into its second generation of family management, to an increased proportion of government work, particularly as Homeland Security became increasingly important after September 11, 2001.

Sadly, this was the beginning of the end for SeaArk which the McClendon family honourably closed down recently. Government work for the US Navy, Marine Corps, Coast Guard and foreign aid programmes, among others, came to dominate the business that had been built on personal relationships, trust and experiences.

Finally, the family grew tired of the unreal and unpleasant demands of government customers that were so different from the congenial commercial and consumer customers they had been brought up with. Australian shipbuilders have been discovering the same thing and are now largely avoiding government work no matter how lucrative it at first appears. That is very sad for all concerned, especially the taxpayers.

Fortunately for the McClendon family, they had other interests, particularly banking, and could afford to bow bow out gracefully and graciously. However, as one of the very few successful American commercial boat exporters, it is disappointing that the behaviour of their government drove them out of what had been a very good business that they loved. Their experience offers a valuable lesson to family businesses, particularly boat building businesses, everywhere.