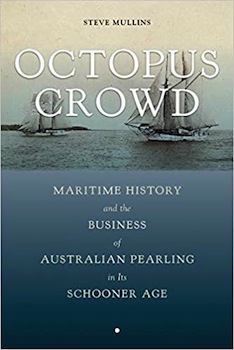 The importance of pearling to the maritime history of Australia is oft forgotten. Without the expensive marketing campaigns of a handful of modern cultured pearl producing companies, most Australians would be unaware that pearls have ever been produced in their country.

In reality, as this excellent book makes very clear, pearling was one of Australia’s major maritime industries for more than one and a half centuries. The book’s focus is largely on one half-century period when the pearling industry in Australian and nearby Netherlands East Indies waters was dominated by “afloat” operations utilising a fleet of stately and comparatively efficient schooners.

The author’s approach is perhaps over-detailed but it gives an idea of the driven, energetic, resourceful and ruthless men who dominated that period of Australia’s pearling industry. Among several such men, one stood out. He was James Clark who was one of those unusual men who dominated in many fields of endeavour. He was, effectively, Australia’s, if not the world’s “Pearling King” for half a century.

His, and the industry’s, stories are well told here in this very high quality book. The book has excellent illustrations and maps and a brilliant bibliography for anyone interested in delving further into this fascinating subject.

Available from The University of Alabama Press, Tuscaloosa, USA.