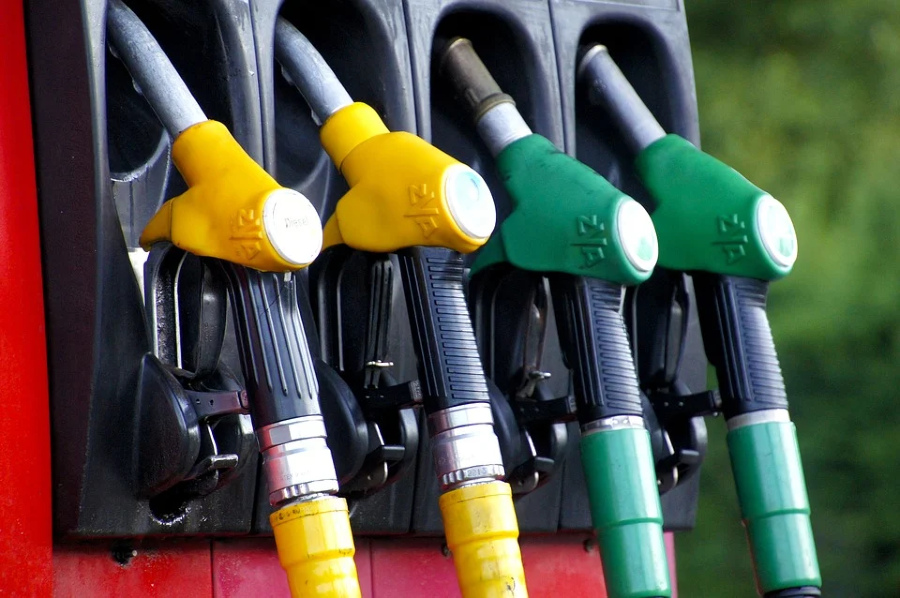 There’s a lot of incorrect and ill-informed commentary at the moment about Australia’s fuel supply chain. Certain parties with vested interests, and those who benefit from general fear-mongering, would have you believe the false argument that the Australian fuel supply chain is fragile and easily disrupted.

Nothing could be further from the truth. Australia’s fuel supply chain is secure and resilient.

The key principle: redundancy and diversification

Risk managers are keen to avoid the realisation of harm that may occur because of deviation from an expected outcome. While the field of risk management is vast, and while there are many different ways to address the risks of harm, there are two key risk mitigation principles that are always borne in mind.

They are redundancy and diversification.

In the event that some kind of harm occurs, if you have redundancy in the form of a back-up then you can immediately use that back-up to carry on with your activity despite the fact that harm has occurred. Similarly, if you have a diverse set of customers, suppliers, assets, or routes, or if there is a disruptive event somewhere, then you have the ability to work around it.

Sources of Australia’s fuel supplies are diverse and secure

Australia’s fuel can roughly be divided into two: crude oil feedstocks (for refining into fuel products) and the actual fuel products themselves.

Incidentally, we’d like to make clear that we’re not opposed to production and exploitation of Australian crude reserves by the private sector if it is sensible and economic to do so. However, there is no basis for public sector intervention on the grounds of risk management.

A change from imported crude to imported refined fuel products

In or about the year 2000, Australia had eight refineries. However, and for reasons beyond the scope of this article, by the time of writing mid-2021 that number had declined to one refinery at Lytton (Brisbane) and the other at Geelong. Continuation of operations at Lytton is under review and it may be converted into a fuel import terminal.

This conversion from refineries to import terminals can be seen in the liquid fuel import statistics. In 2009-10, Australia imported 27,284.3 mega litres of crude oil and other refinery feedstocks, according to Australian Energy Update 2020. Although there has been some year-by-year variation in volumes, that amount in 2018-19 stood at 21,760.8 mega litres. That’s a 20.2 per cent fall in volume.

These figures are worth putting side by side for emphasis: over the ten year period 2009-2019, volumes of crude imports fell 20.2 per cent and volumes of petroleum product imports rose 93.7 per cent.

Not obviously any riskier

Many commentators have expressed the view that this change equates to greater risk. But there is no clear or rational reason as to why the importation of crude oil to Australia is any riskier than the importation of refined petroleum products from the same source. As fuel security consultants Hale and Twomey noted: “It is difficult to conclude that there is a significant difference in supply risk between crude and product imports”, in “Review of Market Resilience to Oil Supply Disruptions” June 2014.

Even if there was to be some kind of supply disruption at source, as we’ve pointed out above, there are many different suppliers. Australia could just change supplier.

Transport of fuel to Australia by ship is also secure and resilient because of massive redundancy and diversity. Let’s have a look at the on-water tanker fleet. The graphics below show the actual, live, positions of ships. The first graph shows a multitude of on-water tankers (excluding LNG, water, inland, special and “other” tankers) around the world. As you can plainly see, there are hordes of tankers all over the world. The second graph shows the position of actual tankers around Australia at more-or-less the same time.

If any one event, or any one actor, or any one region, were to somehow become adverse to the activities of tankers then there are multitudes of tankers everywhere in the world. It is simply not possible for any single actor, or group of actors, or randomly occurring events to so destabilise the world fleet of tankers that seaborne transport of fuel to Australia would be seriously jeopardise.

It should also be obvious, given that Australia is a very roughly oval-shaped island continent, that there are an absolute multitude of seaborne routes to-and-from Australia. The graphs above give an indication of this diversity in routes. In the event that any particular sea-lane becomes impassable for an region, then there are other sea-lanes that can be used.

No single sea blockage, or disruption in any one particular area of the sea can stop ships – they will simply go around. Even where the sea is enclosed, two warring littoral powers couldn’t even prevent shipping from using a shallow, narrow gulf during the 1980s Tanker War in the Middle East.

Similarly, upon arrival in Australia, there are far too many points of entry for any one (or group of incidents) to seriously adversely affect our supply chain security. There are many entry points to Australia for the import of petroleum-related products, as can be seen in the following 2015 diagram from the Australian Institute of Petroleum. This diagram is now a little out of date as the some of the refineries shown have been converted into clean product import terminals. 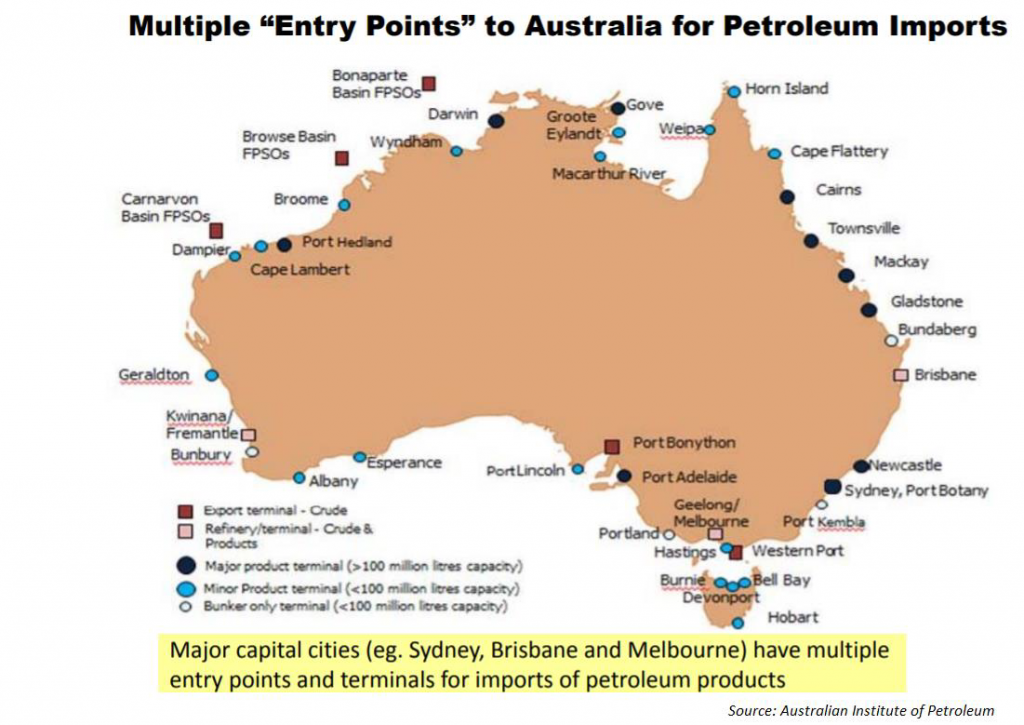 There have been several reviews into the topic of fuel security by energy-focused experts Hale and Twomey. One of their areas of specialist expertise is energy security. Hale and Twomey have carried out several reviews into Australian fuel security and have repeatedly found that the maritime supply chain is flexible and, because it is flexible, resilient.

Shipping Australia particularly notes the Hale and Twomey conclusion that: “in reality, it is difficult to envisage a scenario in which shipping is not available and historically we cannot point to an event which saw the collapse of the petroleum tanker market” (see “Australia’s Maritime Petroleum Supply Chain”, Hale and Twomey, June 2013″).

Hale and Twomey carried out a corporate resilience scoping exercise and an extensive scenario-planning exercise in “Review of Market Resilience to Oil Supply Disruptions” for the Department of Industry in June 2014. They concluded that in the event of any serious disruption then Australia could simply switch from suppliers in one region to another region and that, if there was any disruption, inventory could be moved around by ship. Ultimately, they conclude in that document that “major supply disruptions impacting on the global [petroleum products] market have occurred reasonably frequently in the past and the market has continued to operate”.

Stock on the water equals security and resilience

Hale and Twomey also carried out a “Stock on the Water Analysis” for the former Australian Department of Resources, Energy and Tourism in February 2013.

While some analogies can be drawn between pipelines and ships in the ongoing transport of crude and petroleum products, there is a fundamental difference between the two. As Hale and Twomey explain, “unlike a pipeline where product will stop flowing out of a pipeline as soon as product stops going into it, vessels will keep arriving even if supply is disrupted. With numerous cargoes on-water at all points in time, the supply chain can become non-linear (you do not have to wait for cargo A to discharge before loading cargo B. This allows maximum flexibility between final destinations and allows all buffer stock across various ports to be used as contingency as cargoes are re-optimised to where they are required most. Ships once empty can be used to transport product around the coast to cover any infrastructure disruption”.

In their “Stock on the Water Analysis,” Hale and Twomey noted that Australian companies often own and control significant volumes of stock-on-the-water (i.e. inside ocean-going tankers) because they acquire title to the products during loading at the overseas port of loading. Furthermore, for much of the time, those tankers are in or near the Australian Exclusive Economic Zone.

“While secure under the control of locally based companies, the marine supply chain provides flexibility in responding to disruption events as ship discharges can be managed to ensure all available buffer stocks can be used as contingency. The 15-20 days of stock on the water also delays any impact from any disruption, giving countries time to make internal decisions for responding to any disruption,” Hale and Twomey said.

Australia’s fuel supply chain is secure and resilient. And that’s just a fact.