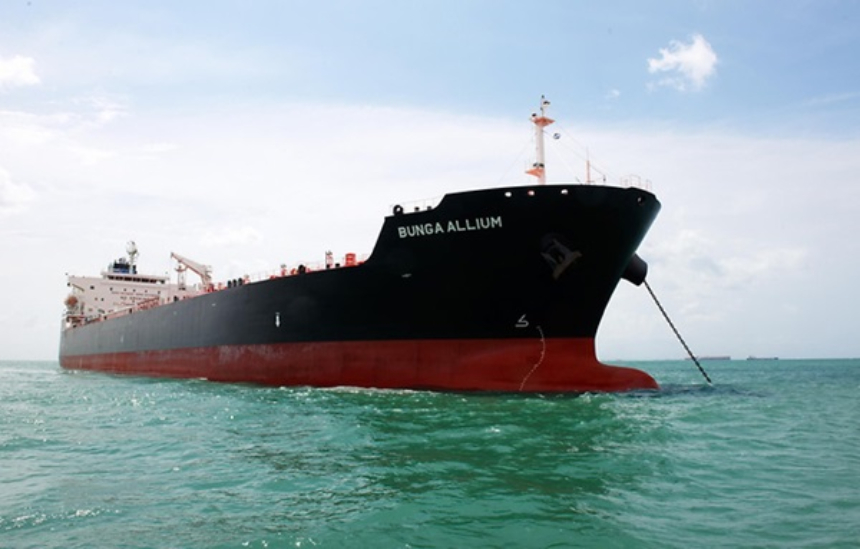 Members of OPEC and allies (OPEC+), agreed to a historic production cut of 9.7 million barrels of crude oil per day (m/bpd) to reduce the massive production overhang and set a price floor to limit the fall in oil prices. The production cut is however not believed to be enough to offset the drop in demand for oil brought on by the coronavirus, but it will certainly have dire implications for the oil tanker shipping market.

While the oil industry has suffered plenty of production-side shocks in the past, the current demand shock is of unprecedented scale. A parallel is drawn to 2008, but the world is now faced with “the Great Lockdown”, as the International Monetary Fund (IMF) dubs it, which is a radically different crisis to deal with.

“The first quarter of 2020 has been one of the most profitable quarters in the past decade for crude oil tankers, which will hopefully provide a liquidity buffer for the challenging months that lie ahead. Once the production cuts set in, the profitable journey is likely to grind to a halt,” said BIMCO’s Chief Shipping Analyst, Peter Sand.

The window is closing as we approach May

While the oil market will remain oversupplied, prompting buildup of oil reserves, it is expected that crude oil tanker spot freight and time-charter rates will face massive downward pressure beyond April, due to the massive fall in demand and oil exports. 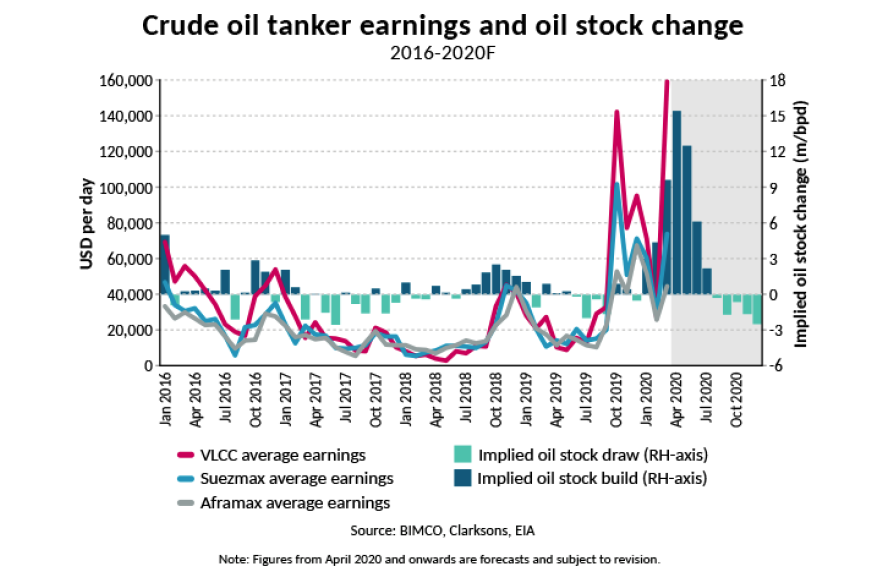 The International Energy Agency (IEA) predicts global oil demand in 2020 will decline by 9.3 m/bpd year-on-year, effectively a collapse in oil demand. The IEA also estimates that floating storage picked up by 22.9 mb in March to a total of 103.1 mb, equivalent of 52 VLCCs (assuming 2 mb capacity). Additionally, given the low oil prices, it seems likely that oil reserves on land and in floating storage will continue to fill in the coming weeks, but the trend is not expected to hold for a prolonged period and, accordingly the positive boost to the crude oil tanker market is likely to evaporate after Q2.

Forecasts are continuously adjusted downwards, and estimates vary greatly, highlighting the uncertainty that market participants must navigate through. The US Energy Information Administration (EIA) estimates in its short-term energy outlook released on April 7 that global petroleum and liquid fuels demand will decrease by 5.2 m/bpd for the full year of 2020. Time will tell whether this has to be adjusted yet again, but demand is being destroyed at an unprecedented rate, setting the scenery for a harsh reality in the crude oil market in the months ahead.

While the uptick of floating storage takes a substantial chunk of capacity out of the market, providing some silver living, it will not be enough to offset the sliding demand and overcapacity. Therefore, it is expected that the second half of 2020 will face a radically different reality than the first half of the year.

“With oil demand collapsing from one quarter to another, the crude oil tanker market is facing disruption on an unparalleled scale. It seems plausible that the market will not return to ordinary supply and demand fundamentals until perhaps the third quarter of 2021,” Sand said.

Currently, the debate revolves around how fast the global economic growth will rebound from the current crisis. At the beginning of the coronavirus outbreak, a V-shaped recovery was suggested by some pundits, but given the structural damage that the virus is inflicting on the global economy, including high unemployment rates, BIMCO expects that this scenario is unlikely.

The IMF has forecast, in its base case scenario, a three per cent global GDP decline for 2020, dwarfing the impact of the financial crisis of 2008.

“Faced with an economic downturn not seen since the Great Depression, a tough year with plenty of uncertainty lies ahead. BIMCO expects somewhat of a normalisation for shipping markets in 2021, given the current information available. However, the last three months have taught us that few things are set in stone and therefore, it is imperative that the shipping industry is constantly adapting to the ever-changing consequences of the coronavirus,” Sand said.

On a more positive note, the plummeting oil prices have led to a drastic narrowing of the VLSFO-HSFO spread to US$67 per tonne on April 15 in Singapore, a stark contrast to US$350 on January 1 when the IMO 2020 sulphur regulation was implemented. The lower cost of bunkering has reduced the daily bunker fuel bill by US$18,320 per tonne, assuming a bunker consumption of 40 tonnes per day at the current spread.