FEATURE | Kangaroo step-up and Kiwi reset in the South Pacific

Written by Graeme Dobell on May 30, 2018. Posted in Ausmarine - Passenger Vessels. 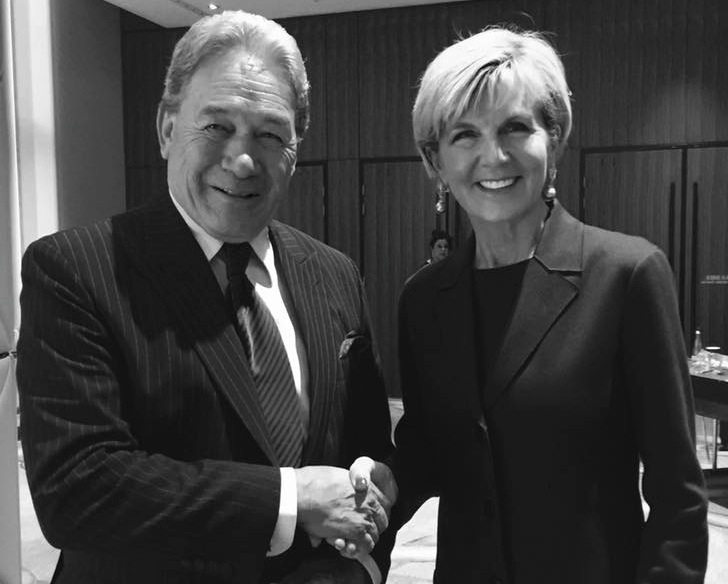 Australia and New Zealand are reaching for fresh thoughts about the South Pacific.

Canberra offers the Islands economic and security “integration” and a “step-up” in engagement. The new government in Wellington promises to “shift the dial” to get a, “reset of New Zealand’s foreign policy direction in the Pacific.”

It was striking but appropriate that New Zealand’s Deputy Prime Minister and Foreign Minister, Winston Peters, flew to Sydney to deliver his Pacific “reset” speech.

Even the traditional elbow jab in any Kiwi speech about Oz was more appeal than shove. “It is not a matter of the country cousin or the senior soldier anymore”, said Peters. “We are in a serious struggle to get on top of the problem we have in the Pacific, and we need best efforts from both of our countries.”

Along with the “dizzying array” of economic, social and environmental challenges facing the Islands, Peters noted, the region is attracting more external actors and interests. “So much is changing in the Pacific, and sometimes it is not for the best. Need and temptation often leads to greater risk than prudence would suggest”, he said.

In its budget this month, New Zealand put money into its reset, lifting aid funding by 30 per cent (an extra NZ$714.22 million over the four-year budget cycle). Most of the aid will go to the South Pacific, which Peters described as “an increasingly contested strategic space”.

Australia’s May budget also announced more aid for the islands – at $1.3 billion, “our highest ever contribution to the region” – even while squeezing development assistance elsewhere.

Australia’s view of its Indo-Pacific future was symbolically expressed via the announcement of two new diplomatic posts: a consulate-general in Kolkata, India (population: 15 million), and our 14th post in the South Pacific, a High Commission in the micro-state of Tuvalu (population: 11,277).

Another bit of symbolic substance was the promise to increase “berthing infrastructure in Sydney” to send even more cruise liners into the South Pacific (an industry worth $2.7 billion to the Australian economy and plenty to the islands).

As an expression of strategic intent and economic contest, Australia elbowed aside China to build an undersea telecommunications cable with Papua New Guinea and Solomon Islands. In budget-speak with a strategic flavour, the cable project will create “a secure communication asset”. Get that emphasis: communication (tick), secure (tick).

Promising to step up “our support for a more secure and prosperous Pacific”, the aid budget showcased Australia’s plans to:

The Foreign Policy White Paper in November announced the integration policy: “helping to integrate Pacific countries into the Australian and New Zealand economies and our security institutions.”

“Given the immutable issues of small size, dispersed populations and fragile economies, the approach of the Australian aid program in the Pacific is to expand opportunities for our neighbours through greater integration”, stated the aid program. “Our Pacific development program is working to enable economic cooperation, including through labour mobility, tackling security challenges, and strengthening people-to-people links.”

Australia can draw on a lot of history and its central role in the region to imagine a mostambitious integrated future. Integration must be a discussion about what the Islands want, but also about how Canberra orders its priorities. As Nic Maclellan points out, there’s lots of potential clash between Australia’s global strategic interests and our regional obligations.

Enter New Zealand. Australia is the absent-minded islands hegemon that isn’t always benign – we have form as a selfish bully. When the Kangaroo is hopping away or going too hard, it’s always useful to have the Kiwi working the other side of the street.

The “come together” call for the South Pacific will have several dimensions. Not least will be what Canberra and Wellington can agree on and then deliver. This should be the easy bit; it seldom is. There’s always a bit of elbow in the Kangaroo–Kiwi hug and huddle.

Then there’s the complex interactions with a range of extraordinarily diverse South Pacific states, from the relative giant in Papua New Guinea to the minnow-sized Tuvalu.

Add in a vital dimension that’s central, especially to Australia’s integration proposal. The islands have to reach a minimum level of agreement among themselves. If Canberra–Wellington consensus is harder than it should be, real agreement among the islands to make real change is rare.

One of the biggest integration questions is how much the islands are prepared to integrate with each other. What will the islands give up or share with neighbours to change the terms of the catch‑22 of their slow development? And what agreement can the islands reach on the “increasingly contested strategic space” described by Winston Peters.

The Kangaroo and Kiwi need to agree. Just as importantly, the islands need to decide and choose.