Written by Michael Shoebridge on May 1, 2018. Posted in Ausmarine - Maritime Security. 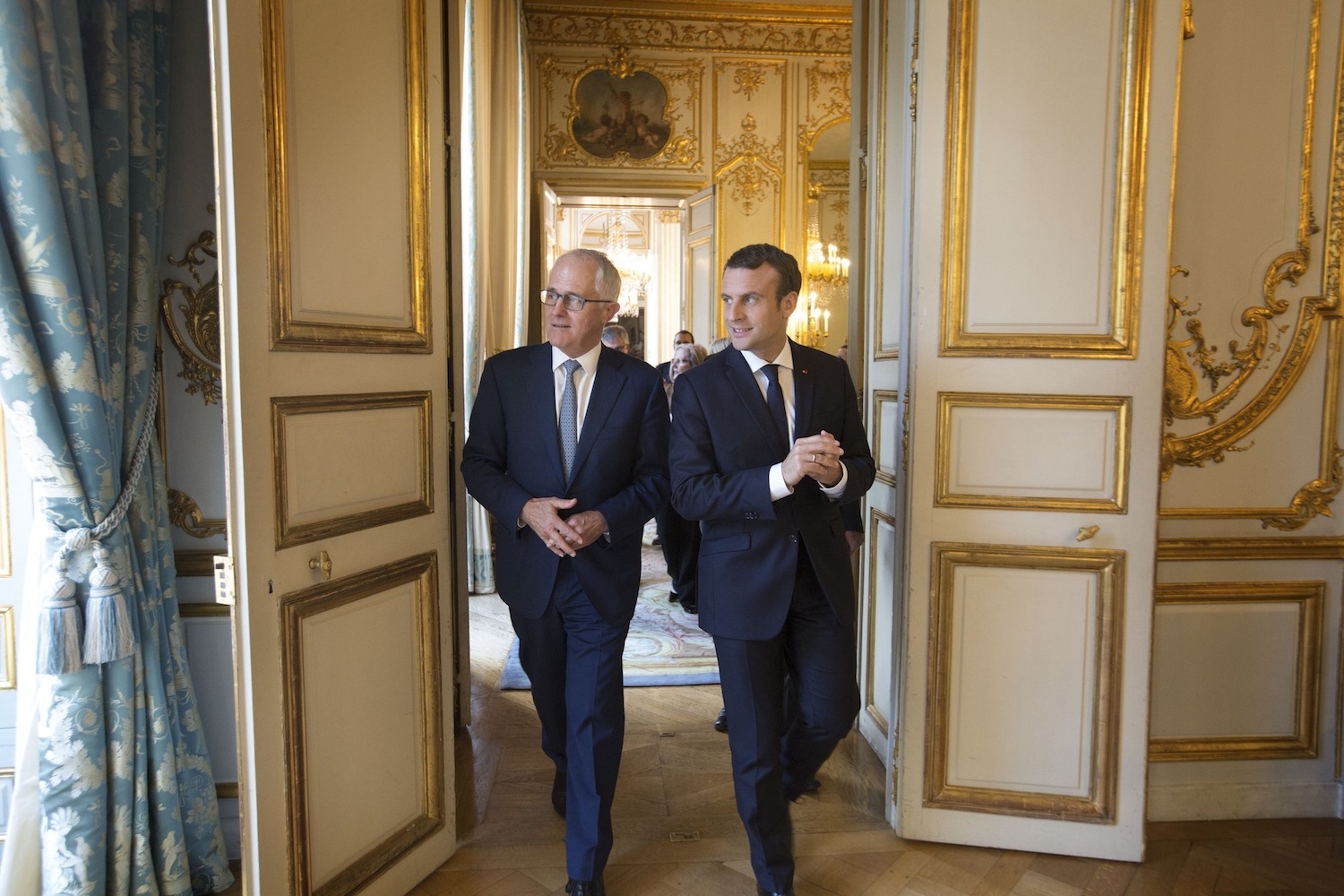 Emmanuel Macron and Malcolm Turnbull have the opportunity to set Australian and French defence industry on a new path that will bring decades of strategic and economic benefit to both our countries.

That opportunity revolves around the direction of the largest project in Australia’s history (whether civil or military) – and the largest, longest export contract that French defence industry has won: the $50 billion (plus) Future Submarine Program (FSM).

Australian debates about this program have been fiery and intense – focusing on whether to build the submarines here or overseas, and arguing about whether a percentage target for Australian content should be set or not.

All that became very emotive, but it missed the larger picture. The strategic industry issue for Prime Minister Turnbull and President Macron is this: “Is the submarine cooperation between France and Australia just a very big contract or is it a long-term strategic industrial partnership?”

It’s very unlikely that Australian firms will supply many of the big components for any of the 12 submarines – the generators, main motors, weapons handling systems, etc. Maybe batteries will be an exception because our Collins submarines already have Australian-manufactured batteries.

We’ve already heard from officials who tell us how silly it would be to set up Australian firms to make just 12 engines, generators, optronic masts, propulsion systems or any other major component. So, if the focus of our industry policy is just on these 12 submarines, already the scope for Australian industry is very constrained.

Not a normal project

If, on the French side, the FSM win is just a very big contract, then we’d also probably find that Naval Group would be thinking that any designs, technical data or knowledge transferred to Australian industry would only be for the purpose of the 12 future submarines.

As a majority French-government–owned entity, Naval Group is no doubt pretty comfortable with its existing French and European supply chains, and happy not to have to disturb these beyond meeting the local industry content demands for the RAN’s 12 submarines. And on the Australian side, Defence’s program folk are probably focused more on the risks in delivering 12 big, new submarines in a timeframe to replace our ageing Collins fleet, rather than creating a deep Australian and French industrial partnership.

An approach that relied on Naval Group’s established overseas supply chains, with some opportunities opened up for local SMEs, would be fine for a normal project where Australia was going to be a minor operator of a large global fleet. So would an approach that says supply chain access beyond the 12 submarines being built for Australia isn’t the FSM program’s business, but should be left to Defence’s global supply chain initiative.

But this isn’t a normal project. Aside from the sheer cost involved, with 12 boats Australia will be the largest operator of Naval Group submarines. This opens up opportunities for a different kind of approach.

If the future submarine program is a long-term industrial partnership between France and Australia, then Prime Minister Turnbull and President Macron might set out a joint vision that in coming decades all Naval Group submarines – not just Australian submarines, but France’s own and those sold internationally – will be designed and delivered by joint French and Australian teams, with both Australian and French supply chains involved in their production and through-life maintenance.

That’s a vision that recognises the unique scale, expense and long-term nature of the FSM partnership. It makes the economics of the partnership more difficult but much more attractive for Naval Group and for Australian industry. It would require different kinds of agreements on intellectual property, and different competitive arrangements for suppliers over time.

“A strategic industrial partnership, or be satisfied with just a very big contract?”

This would bring a Joint Strike Fighter industry model to the submarines, but with one big difference: Australia wouldn’t be one of the smaller partners (buying 72 out of some 3,000 aircraft, with the attendant limited voting rights and influence). Australia would be an almost equal partner with the French.

With both the Australian project team and Naval Group focused just on delivering this project, the lead advocates for this type of strategic industrial partnership will have to be Malcolm Turnbull and Christopher Pyne. Both passionately want to build Australia’s high-tech industrial sector to power jobs and growth in future decades – and this $50 billion mega investment gives them leverage like no other.

It might be easy for President Macron to default to a traditional approach that would maximise French jobs and the benefits to French suppliers while offering Australia the minimum necessary to tick the Australian industry box. Macron, though, might also have the vision to see the benefits to France in uniting the Australian and French industrial and technology bases for submarine design and production.

So, let’s see: will our leaders choose a strategic industrial partnership, or be satisfied with just a very big contract?

Michael Shoebridge is director of the defence, strategy and national security program at ASPI.