Harwood Marine recently commenced and completed works on the, Machiavelli, owned by Heron Construction NZ. This vessel is a 53-metre backhoe construction dredge operating on major projects both in Australia and internationally.

Machiavelli was hauled out of the water at Harwood Marine shipyard during April 2019, in order to carry out the five year survey inspection as well as scheduled repairs and maintenance whilst out of water.

This visit involved a change of class from BV to Lloyds, completed successfully. Whilst out of water, ultrasonic testing was also conducted.

Most of the scope of works was ultra-high pressure (UHP) blasting, abrasive blasting and painting works. 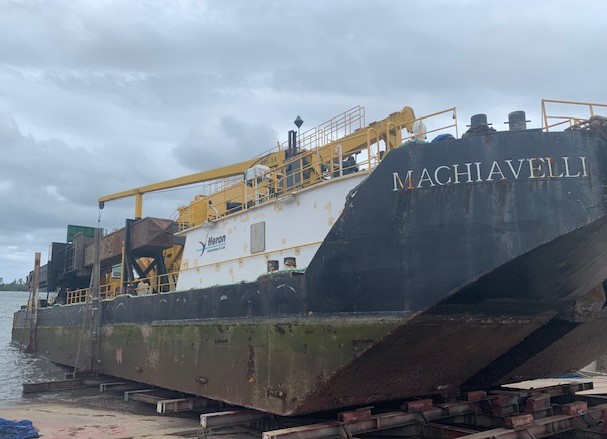 Harwood Marine inspected and cleaned many of the tanks, and there were also some modifications to the backhoe dredge. The scope of works included replacement of engine, with new EIAPP certificate issued.

All spud wire was replaced and new anchor chain installed. Additionally, there was some steelwork cropping and replacement required whilst docked, as well as other minor works as identified throughout the job.

Overall, the vessel was on the slipway for approximately 14 days, then was returned to water so that another seven days of in-water docking work could be carried out.

The in-water work was completed whilst alongside Harwood Marine’s newly refurbished hardstand area, which has now been fully concreted for heavy lifts and additional work area. Refuelling of Machiavelli was also carried out, prior to relocation to the next job on the Gold Coast.

This newly refurbished area has proven very popular for heavy lift load outs and in additional in water works that can be carried out without having to be on the slip. Refurbishments to this site included running three phase power, high strength mooring bollards and including water connections for ballasting and topping up of fresh water tanks. Harwood Marine said refuelling is also now much easier to conduct with roadside tankers.

With this additional, improved work area, vessels can now be serviced concurrently in safe and easily accessible areas. Cranes and other heavy machinery, parts or materials can also be loaded onboard so that clients can be job ready when they leave the facility at Harwood.