Written by Ausmarine on May 11, 2018. Posted in Ausmarine - Fishing and Aquaculture. 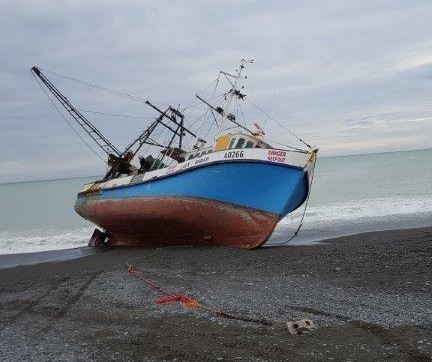 The New Zealand fishing boat Lady Sarah ran aground on Kaitorete Spit near the entrance to Lake Ellesmere because no one was keeping proper look-out and no one was in the wheelhouse, according to a report from Maritime New Zealand. The vessels insurers subsequently declared the vessel a total loss.

Maritime New Zealand has prosecuted Christopher Jarman, the skipper of the Lady Sarah and a director of Inshore Fisheries, which owned the vessel. Mr Jarman pleaded guilty to the charge under the Maritime Transport Act, and was today fined NZ$2,000 by the Christchurch District Court.

Maritime NZ Southern Regional Manager, Mike Vredenburg, said the skipper must ensure a vessel has a proper look-out at all times by all available means in the conditions – in this case that was at night.

“The grounding of the Lady Sarah was unnecessary and avoidable,” Mr Vredenburg said.

“Had a proper look-out been maintained, Mr Jarman would have been aware of the danger and the crew could have taken action to avoid the grounding.

“Having no proper look-out also put the Lady Sarah at risk of collision with other vessels.”

At about 01:00, when three miles from the coast, Mr Jarman engaged the auto-pilot and left the wheelhouse to help the crew with nets and gutting fish. All navigational equipment was turned on but no alarm was set on the radar. No one was keeping a look-out in the wheel-house.

Later, as Mr Jarman was returning to the wheelhouse one of the crew called out that the beach was “right there”. Lady Sarah grounded before Mr Jarman could return to the controls.

The crew pulled the net back onboard, and Mr Jarman put the engine into reverse but was unable to get the ship off the beach. Large waves were crashing side-on into the Lady Sarah and pushed it onto its side.

At 01:58 Mr Jarman made a mayday call and the rescue began, coordinated by the Rescue Coordination Centre NZ.

Another fishing vessel in the area, Nessie J, tried to tow Lady Sarah off the beach but part of Lady Sarah’s side was ripped off and the tow line broke.

With up to 1.5 metres of water in the engine room and a list of 35 to 40 degrees, it was decided to launch the life raft and abandon ship. However, large waves immediately damaged the life raft, which then snapped its line and was swept away.

Meanwhile, a rescue helicopter had been dispatched from Christchurch. When it arrived its crew was able to get lifelines from the bow of Lady Sarah to the shore and help the ship’s crew get ashore.

No one was injured during the grounding and subsequent rescue.

Mr Jarman was prosecuted under the Maritime Transport Act, which prohibits “unnecessary danger caused by the holder of a maritime document”.