Written by Ross Winstanley on November 14, 2018. Posted in Ausmarine - Fishing and Aquaculture. 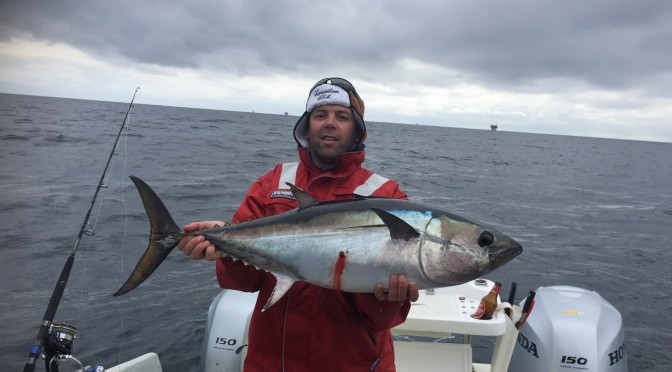 Victoria’s only estimate of statewide recreational fish catches dates back to the 2000/01 National Recreational and Indigenous Fishing Survey.  Every state and territory – except Victoria – has since applied the survey methods developed for that study to estimates their recreational catches.

During the past 18 years, all other jurisdictions have tailored their surveys to meet their particular needs.  In contrast, Victoria has continued to rely on the 2000/01 results. However, apart from being outdated, those results were designed to provided a broad overview and, therefore, have been of limited value for fisheries management and planning purposes.

Despite this, in recent years Victoria has invested more than other jurisdictions in developing and promoting recreational fishing. How effective has this been in terms of increased catches and participation – who knows?  Surely it’s time to address the shortcoming that Victoria faces due to the lack of current and reliable catch information, both statewide and for each of our significant recreational fisheries.

Here are some of the reasons why we need this information:

In 2015, the Victorian Government declared: “We will undertake a statewide recreational catch survey” as part of its Target One Million policy commitment. That promise recognised that detailed recreational catch information for all species taken, statewide and in major waters, is a basic requirement for sound fisheries management and planning.

With this, along with information on where anglers are fishing, how many there are and their preferences, fisheries managers can match their fish stocking and facilities development programs.  As successive governments have closed or scaled back commercial fisheries, stock assessments and fisheries management decisions have become increasingly dependent on recreational fishing information.

During 2017, the Victorian Fisheries Authority released a Target One Million progress score card. All 16 policy promises were marked with ticks, indicating the government’s achievements. This included “Undertake a recreational fishing survey”.  Now it is fair to say that the VFA has “undertaken recreational fishing surveys” targeting Recreational Fishing Licence-holders’ opinions and boat ramp creel interviews since 2015 but that comes nowhere close to the promised statewide catch survey.  What has been delivered cannot achieve what the government saw as being necessary for fisheries management and planning purposes only three years ago.

All around Australia, recreational fisher numbers and the numbers of fish they catch are declining. For example, a NSW statewide survey shows that, along with declining fisher numbers, between 2000/01 and 2012/13, the numbers of every targeted scalefish decreased. These included snapper (down by 27 per cent), flathead (-43 per cent), bream (-59 per cent) and whiting (-73 per cent).  Even catches of stocked species decreased substantially: Murray cod (-49 per cent), golden perch (-78 per cent) and trout (-39 per cent).

In Tasmania, across three surveys between 2000/01 and 2012/13, participation fell by 22 per cent and the total number of fish caught fell by 35 per cent. Both NSW and Tasmania are currently completing fresh statewide surveys.

In creating recreational fishing opportunities, Victoria is closing commercial fisheries and pouring millions of stocked fish into our inland waters but, since 2000/01, we have no idea of what’s happening in terms of fish catches and fishing participation.

Every other jurisdiction relies on catch surveys

Since the 2000-01 national survey, every state and territory – except Victoria – has conducted two or more surveys of catch, effort, participation, etc. Queensland, for example, has been conducting comprehensive statewide surveys every five years since the 1990s and South Australia now also conducts five-yearly surveys. After previously conducting statewide surveys at irregular intervals, Western Australia has completed surveys every two years since 2011.

Why do they do this? These comprehensive surveys are very expensive because of the high costs of including phone-diary and creel survey estimates of total catches. Typically, for the larger states the cost can be between $1.0 million and $1.4 million, so these commitments are not entered into lightly. Every other state and territory has judged the need for and value of recreational catch and participation data to be justified in terms of their contribution to effective fisheries management and planning. Premier Andrews thought so too in 2015.

Victoria stands in the way of a comprehensive national survey

The 2000-01 National Recreational Fishing Survey provided a detailed picture of recreational fishing effort, catches, participation, expenditure and attitudes across all Australian states and territories.  It was the result of collaboration and co-investment by all states, territories and the Australia government. Over the following years, Victoria made full use of this information but the current government’s unwillingness to participate has been a barrier to recent attempts to conduct a follow-up national survey.

Every other jurisdiction is currently conducting or planning their own comprehensive surveys which will be aggregated into a national survey. As Victoria has “declined” to join this effort, a commonwealth-funded contract is being considered to fill in the Victorian blank in order to complete the national picture. But, because recreational catches can’t be estimated without Victoria’s participation, the national survey will be confined to social and economic aspects of recreational fishing.

The VFA has the necessary skills and funds

VFA researchers played an important role in developing the phone-diary survey method which has become the standard nationwide. During 2014, the South Australian Government contracted VFA researchers to conduct a comprehensive survey of recreational fishing in SA using the same methods as the 2000-01 national survey. The report was published only months after the Andrews Government had promised to conduct a similar survey of recreational fishing in Victoria. To this day, the VFA retains the skills necessary for such surveys.

How else can we measure the success of Target One Million?

The government has spent $46 million on the Target One Million program and yet it has no apparent system in place to measure how effective this has been in terms of increases in:

The only credible measure of adult fisher numbers is the annual number of RFLs sold, which peaked at 294,000 in 2015/16.

Since 2000, Victoria’s export fisheries have depended on Commonwealth Government export permits. In turn, these depend on the responsible minister’s approval, based on assessments of the whether the fisheries management arrangements comply with the commonwealth’s Guidelines for the Ecologically Sustainable Management of Fisheries. An important element of the assessments is whether or not the management regime in place is “capable of controlling the level of harvest in the fishery using input and/or output controls.” Controlling harvest levels clearly depend on the ability to measure the harvest, including the recreational catch.

Principle 1 of the guidelines states that, “A fishery must be conducted in a manner that does not lead to over-fishing.” For Victorian fisheries to comply the VFA must have “reliable estimates of all removals” of target species by commercial, recreational and other forms of fishing. These should be current and factored into stock assessments.

Victoria’s current (2015) abalone fisheries management plan refers to the 2000/01 national survey as the only credible estimate of recreational catches, but makes the commitment to “subject to available funding … undertake a rigorous estimate of recreational abalone harvest.” As outlined in Point 5 above, funding should not be a barrier to overcoming this longstanding need.

After 10 years of stocking an average of 2.3 million trout and native fish, in the year to April 2018, the government exceeded its arbitrary five million target, releasing more than six million fish. In doing so it boosted annual expenditure from a five-year average of $0.8 million to an average of $2.8 million over 2015-2019. Without any monitoring and assessment to establish the added value in terms of angler numbers and catches, the government now says it needs to invest in a warm-water hatchery to increase native fish production capacity.

Before investing in a hatchery, how about determining how many anglers are targeting river blackfish, trout cod, Macquarie perch and catfish? It’s one thing for anglers to say “yes please” when asked “Who’s interested in new stocked fisheries,” for these species; the real level of demand is another thing altogether.

A measure of how many anglers are targeting these native fish and what they’re catching would be a good baseline for measuring the uptake under a new stocking program.

All these points considered, it seems that only a government and a fisheries agency uninterested in how many Victorians are fishing and how much they catch would not conduct a thorough survey. These points address just some of the areas where Victoria’s fisheries management and investment planning capabilities are suffering from the lack of credible and current information on our recreational fisheries.  Their apathy over the past 18 years suggests that Victoria’s major parties won’t be including a statewide catch survey among their November pre-election promises.