COLUMN | Times they are a-changing, or are they?

Written by Ross Haldane on February 1, 2019. Posted in Ausmarine - Fishing and Aquaculture. 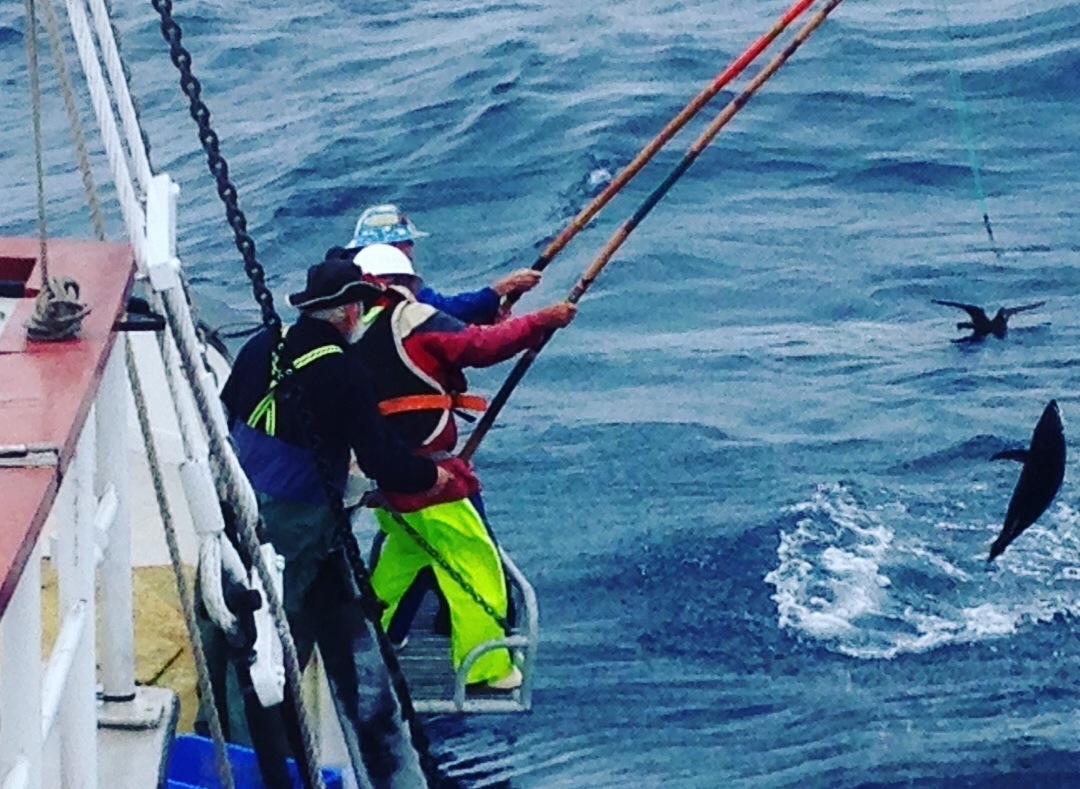 Last year I had the privilege to work with Garry Kerr, a rock lobster fisherman from Portland on the production of his fourteenth oral history DVD.

The format is: simply select an industry or era in our nautical past of the great square riggers, ketches, couta boats, pearl divers and Huon Piners. Round up a collection of aged fisher/sailing folk, place them on a stool in a cluttered shed, on their boat or any quiet place in front of a camera, and press the button.

With the appropriate questions to jog the memory, a few nervous halts and stutters to begin and you have filmed some 80 hours of oral history. Of course this has to be cut and cut again to prise out the interesting, sad and often very entertaining anecdotes. Then finally you have a glimpse into Australia’s nearly lost great maritime stories.

Looking back into the early fishing publications it would be possible to do the same from the magazines like the American publication Pacific Fisherman, Fisheries Newsletter and Baird’s Professional Fisherman, to today’s Ausmarine.

“A longing for the good old days”

The pages of those magazines can tell a thousand stories. Neil Baird has been cajoling me for some years to put pen to paper and add to the rich tapestry of his publications. He thought I might perhaps add some balance or spice things up a little. Having being involved in the Spencer Gulf Prawn Fishery has given me an insight into the highs, lows and the hurly burly of fisheries management, an aspect of the fishing seafood industry that has been my passion for over 40 years.

In interviewing the men and women for Garry’s tuna project, there is a close parallel. When governments are mentioned, the brows of these sun-chiselled men shadow over. When the new ideas arrived, the eyes lit up; the game changers made things better or in some cases worse.

A longing for the good old days was strong and when ports or shipyards closed, the loss was viewed with sadness. The halcyon days of the Streaky Bay and Eden tuna fleets, the raucous pubs and busy canneries become distant memories. The personal stories of loss are quite separate from the mainstream of the political cut and thrust, but the arm wrestling between competing interests in the fishing (seafood) industry appears the same as in those early years. The contestants just have different styled t-shirts with the same logos – only the wording is altered to adjust to our new correctness.

When asked the question, “who was the best fisherman?”, eyes would roll, hands would fidget and almost to a man, there was an inconclusive answer. Occasionally there was some chest beating regarding personal achievement, such as opening up fishing grounds or being the first to invent this or that.

The most delightful claim was an old rock lobster fisherman who was happy to tell in a lowered voice his secret invention. He came up with the idea of putting some tallow on the end of a lead line to determine the bottom type. When made aware of some historic references to others making the same claim, he just smiled.

Measuring the depth of water by lead and line dates back to ancient civilizations. Greek and Roman navigators are known to have used sounding leads, some of which have been uncovered by archaeologists. Sounding by lead and line continued throughout the medieval and early modern periods and is still commonly used today. The Bible describes lead and line sounding in Acts, whilst the Bayeux Tapestry documents the use of a sounding lead during William the Conqueror’s 1066 landing in Normandy. So who first put tallow on the bottom of a lead? Flinders certainly did on his mapping of Australia.

In researching for Garry’s story on the Australian tuna industry it was the written word that was the most powerful and surprising. There is nothing new under the sun, just glossier paper. A 45-foot Ulladulla wooden seiner that looks like a Ferguson tractor with an eight-foot plough is certainly no match for a steel or aluminium gleaming monster being wheeled out of a Western Australia yard, but in it’s day it was headlines.

The pages of our early newspapers and industry newsletters were very often accurate in canvassing problems. In the 1930s a Tasmanian fishermen described tunny as “only fit for dagos”. A comment that when compared with “us Britisher’s diet” could be viewed as a compliment rather than a slur, but times have changed and tuna has skyrocket up the culinary taste and price ladder.

Through all this change, science, politics and social licence to operate, professional fishermen seem today to have lost some of the respect that previous generations had in the sleepy fishing villages, such as Port Fairy, Eden, Maloolabah, Fremantle, Broome, Robe and Bischeno.

It is true that Australia has not had the historic connection to the fishing industry as that of Nova Scotia or Massachusetts, where cod and a schooner are encased on their coat of arms and money. Australia, with it’s emu and kangaroo, is focused on the inland of drovers shearers and the Man from Snowy River. Fishing is a young industry in Australia but it has transformed itself more than in other countries. We can probably thank our separate states for that, where our railway network with it’s three different gauges mirrors the jumble in our fishing management outcomes: the Good, the Bad and the Ugly.

And what about today’s issues? What about the one that no one speaks of?

“We are the best in the world at what we do”

There is a bull seal in the boat shed. We all need to keep a close eye on how the governments of five states, NSW, VIC, TAS, SA and WA, as well as the commonwealth, handle the recreational southern bluefin tuna (SBT) question.

It is of interest that pre-World War II the Californian tuna fishermen put aside catching bluefin tuna and left it to Hollywood’s rich and powerful to catch them from their flash game boats. It appears a rational decision by the fisher folks of San Pedro that they weren’t about to pick a fight they couldn’t win. They did however take on the Japanese over imported cheap canned tuna. How times have changed.

Best get a ringside seat because it’s going to be fascinating to watch how this messy saga unfolds.

The commonwealth has contracted the University of Tasmania to undertake a survey of recreational fisher effort, catch, release and harvest estimates of southern bluefin tuna and other large tuna and billfish.

The survey will be undertaken in South Australia, Victoria, Tasmania and New South Wales.

The results of the survey are due mid 2020. It’s possible that 2,000 tonnes will have gone under the radar before OOPS, meetings or negotiations get underway. The survey will be used to create even more questions (the weather, temperature, ocean currents, age of fish, regional jobs and of course votes etc) to put in the mix. We should ask, when the social media balloon is let loose, “since when have facts and science been used in resolving fishing issues in recent times?”

So with everyone bar the Australian amateurs inside the tent regarding the management of the global tuna industry through the Commission for the Conservation of Southern Bluefin Tuna, it means that every fish is tagged, weighed and measured, logbooks filled in and vessel monitors switched on while our sports and game fisherman are roaming the seas. Watch our election cycle per state – “I fish I vote” – it will be like watching Willy Weather, always changing and never quite right.

Well done Garry in capturing the stories and lives of those that go down to the sea in boat to bring home some fish to sell and be eaten. Watching from the side is the community of Port Lincoln firmly hanging on to the tuna’s tail. Eden, Esperance, Albany and Ulladulla have long since lost their tuna fleets and canneries but they are no orphans in the changing lives of coastal communities. Hull, San Diego, Monterey and many of our Australian fishing ports are now only reminders of their fishing glory days.

Port such as SA’s Port McDonald , Victoria’s Portland and Port Fairy, NSW’s Bermagui and the Tasmanian east coast ports will now be making their play for a slice of the tuna pie.

In discussing matters fishy and when asked for my thoughts on why this or that is like it is, I have often replied, “That’s why sea birds have long wings; it helps them adapt to change. Fish are where you find them.”

That’s why Neil’s publication is not only producing news, it is recording history.

Fisheries are very hard to manage because they don’t have wings and they involve people.

Ross Haldane comes from one of the oldest fishing families in South Australia. He has been heavily involved in developing the excellent fisheries management regimes in the Spencer Gulf and in the Great Australia Bight. He has been both a prawn fisherman and tuna fisherman.